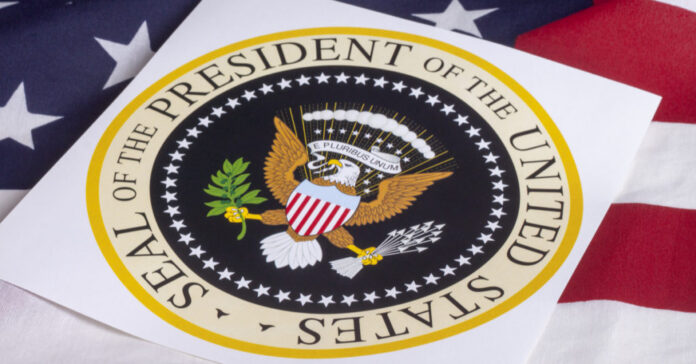 Who is the President of the United States of America? Well, based on the election and who was inaugurated, we would have to say that it’s Joe Biden. But…who is the ‘real’ president? Who is the one who is running things in the White House? Who is the one making the final decisions?

It’s hard to imagine that it’s actually Joe Biden. He’s a stumbling, bumbling idiot who sniffs people too closely and can’t even get the names of important political figures correct. Are we to believe that he’s the one signing all of these executive orders on his own without them simply being placed in front of him by someone who is the ‘real’ president?

Even Biden himself doesn’t admit to being the president on most days. He has asked on many occasions “Who is the President?” or has announced that Kamala Harris is president…or that he’s part of the Harris-Biden administration.

Does Biden have enough mental acuity left to know that he’s the President? We really have to wonder, which is why one reporter couldn’t pass up the chance to ask the question when given the opportunity.

Charlamagne tha God was able to snag an on-air interview with Vice President Kamala Harris. And the Comedy Central host isn’t the kind of person who is going to miss out on asking the hard-hitting questions. And if the name sounds familiar, yes, he’s the same host who was told by Biden that “you ain’t Black” if you hadn’t decided whether you were going to be voting for Joe Biden or Donald Trump during the general elections. That was Biden’s way of saying that he had the Black vote in the bag – and it angered countless voters.

So, Charlamagne asked the question “I want to know who the real president of this country is. Is it Joe Biden or Joe Manchin?”

This question had to do with the fact that Manchin has played a significant role in curtailing the progressive spending packages.

The question also had the potential to get ugly. No one wants to hear that a Republican Senator is being considered the “real” president over Joe Biden…at least not when that person is the VP of the administration.

Symone Sanders, Harris’ aide and the one who has already said that she’s leaving at the end of the year, interjected during the interview to say that “I’m so sorry Charlamagne, we have to wrap.”

Wow, isn’t that a convenient time to interrupt? It’s as if she’s concerned that Harris might actually say something that could be difficult to come back from. Is it possible that Harris was going to set the Comedy Central host straight and tell us something revealing?

Luckily for us, Harris decided to ignore her aide (possibly a reason why said aide has resigned) so that she could argue the question. She said that it made Charlamagne sound “like a Republican.” Wow, that’s a low blow. So, anyone who asks about such things is a Republican? It’s really no wonder why her approval rating is sitting in the high teens. She’d rather pit the political parties against one another rather than focus on the best way to run the U.S. – and ensure that the American people are being properly served.

There are a lot of “no” comments made in there as if she had to hype herself up to actually come forward and say that Biden is the president. If Harris bothered to pay attention to polls, she’d realize that even Democrats are asking if Biden is the president since he’s not really getting the job done.

Since Charlamagne didn’t get the full questions and comments in that he had wanted, he tweeted a follow-up that Harris should apply “passionate pressure to progressive roadblocks,” referring to Manchin. It’s quite the final punchline considering Harris can’t apply pressure to anyone.