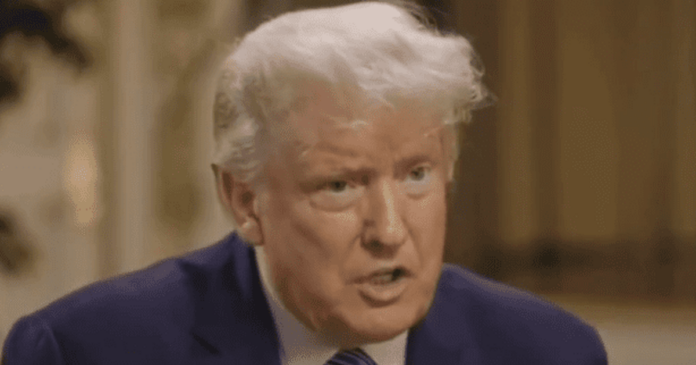 Former President Donald Trump raised eyebrows recently during an interview with conservative commentator Candace Owens when he touted the benefits of the COVID-19 vaccine. Now, some on the right are all in a tizzy because he is not on the anti-vaxx train. But, is this as big a deal as some are claiming?

On Tuesday, Trump participated in an interview on the Daily Wire show “Candace,” in which he took credit for the “incredible speed” at which vaccines were developed while he was still in office.

“I came up with a vaccine, with three vaccines,” he said. “All are very, very good. Came up with three of them in less than nine months. It was supposed to take five to 12 years.”

Owens pushed back slightly, pointing out that more Americans have died from COVID-19 this year than in 2020, even with the vaccine being in circulation.

“Yet more people have died under COVID this year,” she argued. “By the way, under Joe Biden, than under you and more people took the vaccine this year. So people are questioning how–”

“Oh no, the vaccines work, but some people aren’t the ones. The ones who get very sick and go to the hospital are the ones that don’t take the vaccine. But it’s still their choice. And if you take the vaccine, you’re protected.”

“Look, the results of the vaccine are very good, and if you do get it, it’s a very minor form. People aren’t dying when they take the vaccine.”

Earlier this month, Trump also praised vaccination during an interview with former Fox News host Bill O’Reilly, noting that he had received his booster shot. During his conversation with Owens, the former president stressed that he opposes vaccine and mask mandates. “People have to have their freedom,” he said.

Several high-profile right-wingers savaged Trump for promoting the vaxx. Conspiracy theorist Alex Jones slammed the former president, claiming he has joined with the “New World Order” and other unseemly individuals.

“Sign on to it. Take credit for it. Take this, sign on, believe it. Hell, we’re fighting Bill Gates and Fauci and Biden and the New World Order and Psaki and the Davos Group,” Jones raged on his show this week. “And now we’ve got Trump on their team!”

Ali Alexander, one of the founders of the “Stop the Steal” movement which helped Democrats win Georgia’s Senate seats, also took issue with Trump.

“Remember when Trump said you would be playing right into the Democrat’s hands by mocking the rushed, ineffective shot?” he wrote on Telegram. “Yeah, Joe Biden praises him and his booster shot. Trump, stop. Just stop. Have your position (backed by Fauci) and allow us to have ours (which is backed by science). This losing is getting boomer level annoying.”

Conservative political cartoonist Ben Garrison also lashed out at the president, drawing a cartoon showing Trump on a vaccine bandwagon while MAGA hat-wearing supporters boo him.

Even the QAnoners had their panties in a bunch over Trump’s comments. So much for trusting the plan, right?

But here’s the question: Was Trump wrong, though?

Some have taken issue with Trump seeming to say that nobody who takes the vaccine dies from COVID-19. However, anyone who has been paying attention to his stint in politics over the past five years has heard the maxim: “Take Trump seriously, not literally.”

The former president is known for speaking in exaggerations and hyperbole. Bigly. In light of this, suggesting that Trump literally means not a single vaccinated person has died from COVID-19 is akin to believing that he told people to go into their laundry rooms, grab a bottle of Clorox, put it in a syringe, and inject it into their veins.

I think it’s safe to say Trump knows that at least some vaccinated people have died. He was simply pointing out the fact that most of those who have been hospitalized for, or succumbed to, the virus are those who have not taken the jab.

Indeed, most of those who support Trump have the exact same position: Get the vaxx if you want, but don’t mandate it for the rest of the country. This is a sentiment with which most of us can agree because we’re not authoritarians.

To put it simply there was nothing wrong with Trump’s stance on the vaccine. He simply reiterated what many of us believe: People should be free to make their own choices.