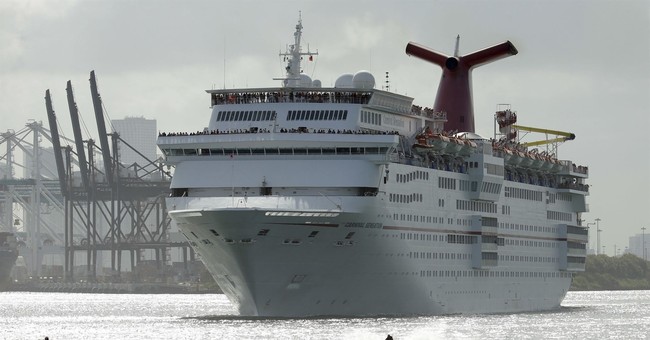 If you’ve taken stock of the COVID-19 numbers coming out of New York City, they aren’t good. In fact, the heavily-Democratic municipality is looking at its worst coronavirus case numbers ever.

Now, the logical response to that is to ask how that’s possible. After all, New York City has a vaccine mandate, a vaccine passport system, a stringent universal mask mandate, and is one of the most vaccinated places in the country. Why aren’t all those draconian mitigation measures resulting in a linear reduction in the spread of COVID-19?

But it’s not just blue areas where vaccine passports and strict testing regimes are failing. Another outbreak in Florida may represent the best evidence yet against that such mitigation measures are pointless in preventing the spread of the virus. A cruise ship in which nearly everyone was vaccinated, and those that weren’t tested negative prior to boarding, has seen a coronavirus outbreak.

This per the Miami Herald.

A group of passengers and crew aboard a Carnival Freedom cruise that departed from Miami Saturday for the southern Caribbean has been infected by the coronavirus and so the ship was denied entry to Bonaire and Aruba, Carnival Cruise Line confirmed Thursday

It’s the third COVID-19 outbreak in less than a week affecting cruise ships operated by Carnival and Royal Caribbean that have departed Miami and Fort Lauderdale ports.

The infections come as the omicron variant, now the dominant strain of the coronavirus in America, keeps spreading in Florida and nationwide among even fully vaccinated people.

And while we don’t know how many were actually infected on the Carnival Freedom, we do know that the Symphony of the Seas docked several days ago with 48 positive cases, despite 95 percent of the ship being fully vaccinated. Of those who tested positive, 98 percent were fully vaccinated. In other words, there’s no possible way to blame that outbreak on the “unvaccinated.”

Forty-eight positive tests out of thousands of people on board may not sound a lot, but when you do the math as a seven-day rolling average, something common in judging COVID infection rates, that’s actually around the same positivity rate as New York City (800 per 100,000 vs. 1050 per 100,000), which again is seeing record high case numbers.

What this says to me is that vaccine passport systems are completely nonsensical. We’ve known for a long time that everyone spreads COVID-19, and now Omicron is even more transmissible. Given that, you are accomplishing nothing of value by segregating the vaccinated and unvaccinated.

Instead, these vaccine passport schemes are simply meant to punish and shame. There is no reason to stop a person from eating at a restaurant or going to a baseball game because they are unvaccinated. They represent no more of a statistical risk of spreading the coronavirus than the vaccinated person sitting next to them.

Besides, isn’t the entire point of getting fully vaccinated that it supposedly works? And if it works, what does it matter who the vaccinated interact with? None of this makes any logical sense, and again, that’s the point. This is about bending people to the political will of the left, not actually protecting anyone.