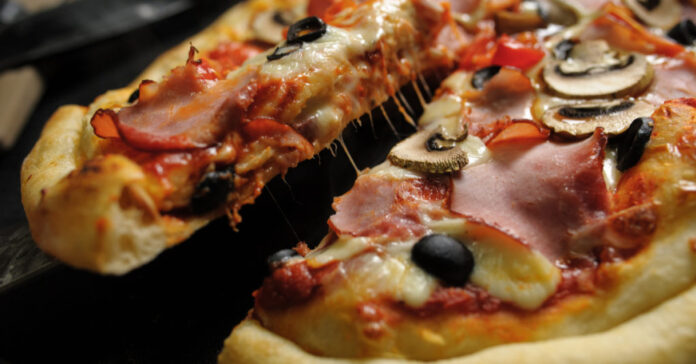 Mike Scotto di Frego, owner of Brothers Pizza took a violent beating, knocking him out and nearly stomped to death while trying to prevent a fight from turning into an all-out bloodbath. The event took place early Sunday morning, it was just business as usual when a string of thugs entered his pizzeria in Winston-Salem, North Carolina, and a fight quickly emerged, where di Frego attempted to defuse the situation.

One of the hoodlums hit di Frego’s head as though he was trying to serve a volleyball. Then, the criminal proceeded to stomp on his head, rendering him unconscious, but the beating didn’t stop there as he senselessly continued to stomp. All the while, he was being videotaped. The strangest thing about it is, these menaces to society don’t care if they’re being recorded because people rarely rat them out, and if they’re ever identified, no one holds them accountable anymore.

Brothers Pizza owner Mike Scotto di Frego said that it was business as usual early Sunday morning — up to the point where a brawl broke out among at least five people.

In a Facebook post’s thread, di Frego attempted to recall the moment he attempted to intervene and evacuate the restaurant. He wrote, “Still trying to get the story altogether but I was breaking up a fight between two girls and three guys got involved and I got jumped and stomped out till I was unconscious. I have 2 boys. I’m a single dad. I don’t need this in my life.”

He then added, “Thank you everyone for reaching out. I greatly appreciate it. I’m doing a lot better your [sic] just going to have to look at my ugly face for the next couple weeks but I will look forward to seeing everyone back at Brothers.”

Later, Scott regretfully informed his patrons he was being forced to reduce the hours of his pizzeria due to the recent events. He would not be able to stay open as late and serve the community as he has in times past.

Winston-Salem has had the same Democratic mayor for 20 years, Alan Joines, and crime rates just keep climbing. Coincidence? I think not. We have seen time and welfare recipients are sucking the country dry and the politicians can pack it up, go home, and retire, but not the middle class, small business owners.

Some of us don’t know it yet, but the middle class is vital to our economy. The blue-collared citizens of America are what keep this great country running. It felt as though the pandemic was designed to take down small businesses. While that statement sounds a little inflammatory, hear me out. Lowes, Walmart, Home Depot, Sams, Costco, etc. were all thriving while small businesses were being choked out by restrictions that seemed to be designed to shut them down. The disrespectful illiterates that come in and start fights and trash businesses are the exact opposite of what this country needs right now

As the cost of ingredients, utilities and rent continue to soar leaving most small businesses with no choice but to close their doors. The ones that are left open should be supported by fellow Americans while these blue collars struggle to keep the wheels turning.

Currently, due to the brawl at their pizza joint, the brothers’ di Frego have permanently changed their hours to Thursday 11 am-10 pm Friday and Saturday 11 am-12 am and Sunday 11 am-10 pm, and every family who enjoyed events there, and every person who depended on those hours for their living wage, misses out because of the lack of lawful actions by the unrelentingly lawless.