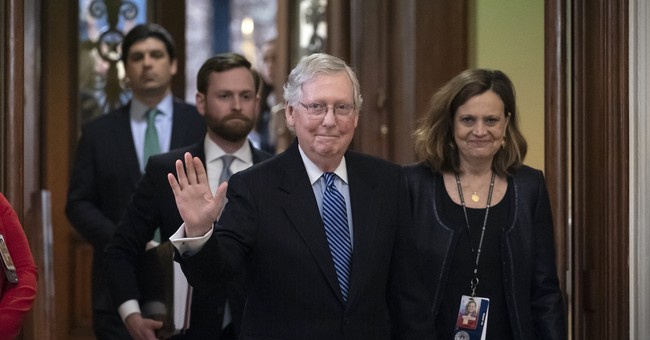 We reported last week on how Sen. Minority Leader “Cocaine Mitch” McConnell (R-Ky.) was taking full advantage of the infighting currently on full display between the Biden White House, “woke” Democrats in the House and Senate, and Sen. Joe Manchin (D-W.Va.) by dangling the “party switch” carrot in front of Manchin in a very public way.

With various reports swirling that Senate Democrats, in particular, are terrified that Manchin might flip from Democrat to Republican sooner rather than later (if at all), McConnell told reporters last week that though he didn’t think it would happen, “it would not surprise you to know that I’ve suggested for years it would be a great idea, representing a deep red state like West Virginia, for him to come over to our side.”

Today during an interview on Fox News, McConnell took the opportunity again to increase the pressure on Manchin, doing so at the right time considering how Manchin effectively nuked Joe Biden’s “Build Back Better” agenda this past weekend for the foreseeable future and also considering the childish blasting Manchin got from the White House in the aftermath, which Manchin made clear he did not appreciate.

“Why in the world would they want to call him a liar and try to hotbox him and embarrass him?” McConnell asked during the interview, referring to the response Manchin received from White House and Democrats.

“I think the message is, ‘We don’t want you around.’ Obviously that is up to Joe Manchin, but he is clearly not welcome on that side of the aisle,” he told the newspaper.

“No wonder why Joe Manchin is uncomfortable on the Democratic side,” McConnell also stated. “He would be a lot more comfortable on our side.”

For reasons I explained here, for the moment there’s no reason for Manchin to switch teams. He’s right where he wants to be as the most powerful player in Washington, D.C., even beyond Biden. But there are future electoral considerations Manchin will have to make in a state that, as McConnell noted, is redder than red and which Manchin narrowly won in 2018 over his Republican opponent by 19,000 votes and where the Libertarian candidate got 24,000 votes.

The election prior to that was smoother sailing for Manchin, but things are rapidly changing in the state. Not only that, but as McConnell also pointed out, today’s Democratic party is the Bernie Sanders Democratic party, not the moderate/pragmatic/Blue Dog Democratic party one used to be able to catch glimpses of here and there.

All that said, it might be that it’s the radical so-called “progressives” in Manchin’s party that push him over the edge, like AOC, who on Monday floated a retaliation idea that would absolutely infuriate Joe Manchin should the Biden White House take her up on it. It involves, in a nutshell, doing an end-run around Congress by using Biden’s executive powers to get what they want, as well as possible punishment from Sen. Majority Leader Chuck Schumer (D-N.Y.) towards Manchin.

As I said before, regardless of the machinations are going on behind the scenes by enraged Democrats, Manchin will for now enjoy basking in his role as Democrat party contrarian and all the attention that goes with it, while “Cocaine Mitch” will occasionally put public pressure on him if for no other reason than to give Senate Democrats including Schumer more stressful, sleepless nights.