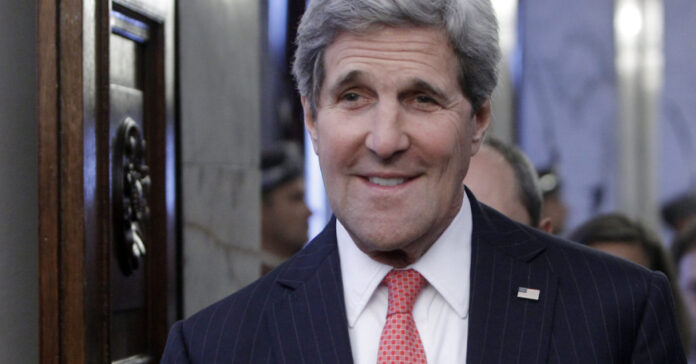 It probably goes without saying that Texas Republican Senator Ted Cruz is not a big fan of President Biden’s environmental guru John Kerry. Cruz said recently that John Kerry is “the customer of the year for Chinese concentration camps.” Cruz was giving a speech in which he spoke out against human rights abuses in China. The senator tweeted the same statement about Kerry and included a video in the post of his interview with Fox News’ “The Faulkner Focus.”

Cruz said in that interview that President Biden has shown weakness to China. He described an amendment that is on the floor of the Senate which could keep the Biden administration from importing any goods made with slave labor in concentration camps in China. This bill would specifically focus on electric vehicles or solar panels made in these camps.

Senator Cruz revealed that every Democrat except for Joe Manchin voted against the legislation, which was called the Uyghur Forced Labor Act. This bill was first introduced by Sen. Marco Rubio, a Republican from Florida. The Democrats immediately began to oppose it, so Rubio tried to understand why there was such resistance.

He wrote in an October statement that rumors were swirling in Washington D.C. about President Biden and his climate czar, John Kerry. There was a buzz focusing on Kerry’s resistance to taking action against the Chinese Communist Party’s reliance on slave labor. It has become known that John Kerry and his wife have at least $1 million invested in Hillhouse China Value Fund L.P, a Chinese investment group.

Cruz maintains that this reality should raise questions as to whether Kerry can negotiate fairly with Beijing on climate change.

To make matters even worse, there is a report that Hillhouse is a “top shareholder” in a company in China called YITU Technology. It was blacklisted by the Trump administration in 2019 for its participation in the surveillance, detention, and repression of Uyghurs and people beyond. This all means that John Kerry is profiting from people being oppressed in slave labor.

Cruz said, “Now it makes sense why he is actively working against my Uyghur Forced Labor Act, which would make it impossible for products made with slave labor in Xinjiang, China to be imported into the United States.”

Cruz wrote in a statement to The Daily Wire that John Kerry should be ashamed and Joe Biden ought to be ashamed, too. He said, clearly, that the United States is spending hundreds of millions of dollars of U.S. taxpayer money to fund the concentration camps where there are over a million Uyghurs in prison.

Senator Cruz, then, wrote in his statement that China is the single greatest geopolitical threat facing America for the next century. He said that we should use strength and clarity in standing up to China. We should call them out for murder and torture in concentration camps. We should make them stop stealing intellectual property, stop their military aggression, and take responsibility for covering up their part in the COVID-19 spread globally.

“It originated—I believe the evidence is compelling that it originated in the Wuhan lab, a Chinese government lab. They covered up the outbreak, and they are responsible for the hundreds of thousands of deaths and the trillions of dollars of damage caused by COVID,” Cruz said.

Cruz challenged the present administration to stand up, call out China, and hold them responsible. He talked about the dozens of pieces of legislation that he has introduced taking on China, and then he asked, “Where are the Democrats?”

The answer to that question, at least as it appears with John Kerry, is that the Democrats are complicit in the big money interests that need Chinese markets to stay strong.