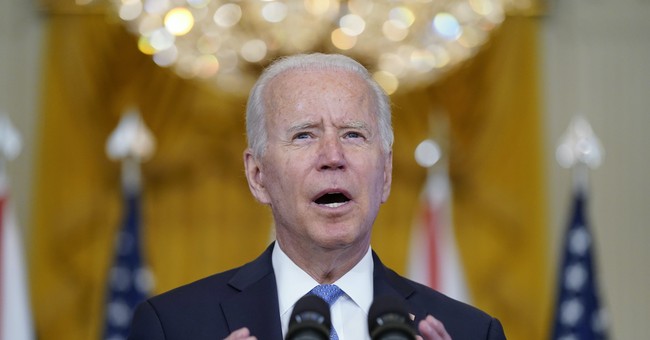 Joe Biden gave his anticipated remarks about COVID today. He coughed throughout his remarks and snapped at reporters. He also told lies about Omicron transmission and about the unvaccinated. But in the process, he took a few questions about the failure of his Build Back Better bill and the objections of Sen. Joe Manchin (D-WV) that killed the bill. That’s when Joe Biden decided he wasn’t finished with stepping in it yet when it comes to Manchin.

“Some people think maybe I’m not Irish because I don’t hold a grudge. But I want to get things done,” said Biden, when asked if Manchin broke a commitment to him. “I still think there’s a possibility of getting Build Back Better done.”

Biden continued, “Joe (Manchin) went on TV today, uh, (I don’t know) whether it’s TV or not, I’m told he was speaking to the Liberal Caucus in the House and said, ‘Joe Biden didn’t mislead you, I misled you.'”

He then told a reporter that “Senator Manchin and I are going to get something done,” and then he stomped out of the room without a mask.

There are a couple of problems with Biden’s claims. First, there goes Joe Biden with an ethnic stereotype about Irish and grudges. Funny how that never seems to be noticed by media when Democrats do things like that.

But this claim that Manchin had admitted he misled Democrats was a bunch of malarkey. Joe Manchin has been definitive right down the line what his position was, what he could go for, and what he couldn’t. But he never publicly said he’d agreed with the bill at any point. The same was true about Sen. Kyrsten Sinema (D-AZ) as well, by the way. So it wasn’t just Manchin. Manchin has publicly said that the failure of the negotiations was that due to “inexcusable actions” of the White House staff.

“It is not the president. This is staff,” the West Virginia Democrat told home-state radio host Hoppy Kercheval.

“And they drove some things, and they put some things out, that were absolutely inexcusable. They know what it is.”

Manchin continued: “I’m always willing to work and listen to try. I just got to the wit’s end and they know the real reasons what happened.”

He said he resented the efforts to try to badger and beat him into agreeing.

Manchin has never said that he misled anyone. Indeed, it’s been the White House and Joe Biden that has been misleading on the issue right down the line.

After the lie by Biden, the White House must have realized that wasn’t going to go over well with Manchin and they tried to clean up what Biden said about Manchin.

The White House later clarified Biden’s remarks. A spokesman told reporters that the President wanted to clarify that Senator Manchin did not characterize himself as’ having been ‘misleading.’

Oh. So publicly lie about Manchin and then try to pull it back with less spotlight. If they think this is helping his cause when Biden does things like this, they once again have Manchin all wrong.

In addition to what we already noted about the breakdown, it’s also worth noting that Manchin felt the White House put his family in danger.

White House staff had given Manchin a heads-up on Thursday that the president was soon to put out a statement accepting a delay in the Build Back Better Act and that it was going to mention the West Virginia senator by name. Manchin objected, asking that either his name be left out or that he not be alone because his family had already been the target of abuse and he didn’t want to be singled out.

But the statement went out anyway, and contained only Manchin’s name.

So he asked the White House not to make him more of a target because of the danger to his family and they didn’t give a darn. Add that to one more thing where they treated him badly. It’s astonishing, frankly, that he hasn’t just called Biden a liar. He’s got a very long fuse, given how he’s been treated. But it’s not hard to understand why he finally formally gave up on it.