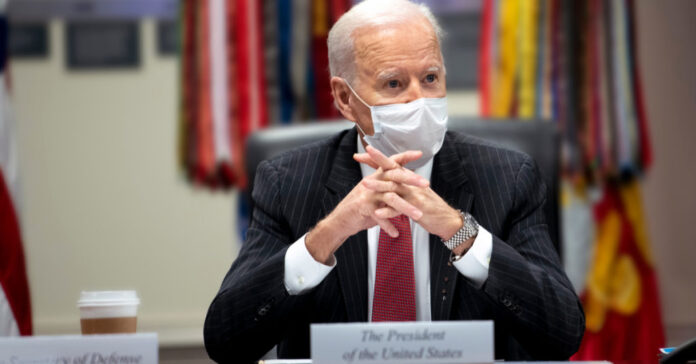 The nation is watching as more businesses and institutions rally together to swamp Joe Biden with one lawsuit after another. The president has issued so many unconstitutional executive orders that the courts have to get involved in balancing out the power abuses he is committing.

Joe Biden uses his executive powers not to defend the country but rather to force people to do what he wants them to do. He thinks it is his right to make laws and force people to obey them. But the Constitution of the United States gives the power of law development to Congress. The Legislative Branch is the only federal power that has the right to make law. Any attempt by Biden to usurp that duty will land in court for the Judicial Branch to sort out.

The Daily Wire brought the latest lawsuit to stop the illegal mandate that Biden issued, commanding people to vaccinate or run the risk of losing their jobs. They have since had to update their lawsuit, which successfully stopped the mandate because The Occupational Safety and Health Administration has asked the judge to lift the injunction so Biden can start forcing people to vaccinate again.

OSHA was commissioned with the task of following up on the vaccination deadlines. They were empowered to collect fines for first-time offenses and repeat offenders. OSHA can fine a company $13,653 for a violation and $136,532 for any repeat violation after that. Biden plans to find enough companies so he can fund his socialist programs.

Biden is facing the problem that OSHA does not have the power to inflict such harm on the American people. The Daily Wire updated its lawsuit to mention that “OSHA’s radical power grab is unconstitutional, not authorized by statute, and fails to satisfy the basic requirements for an ETS. OSHA’s arguments are so outlandish, they can only be understood as post hoc excuses for a general vaccine mandate masquerading as a workplace safety rule.”

The Daily Wire is fighting back by explaining why OSHA’s move to take power is illegal. They claim that it is unconstitutional, has no backup by any known statute, and does not meet the requirements for such a demand. The Biden-controlled organization uses the workplace as a cover to grab the power they need to control the private business sector.

The Fifth Circuit Court was the entity that put the injunction against Biden in place. The three-judge panel had noted that OSHA was exceeding its power and authority by trying to find people and force them to vaccinate, all in the name of workplace safety. They needed the time to listen to arguments and determine the right course of action.

A statement from the media outlet noted that “The mandate is unconstitutional because the Constitution does not grant Congress — much less OSHA — the general police powers needed to mandate vaccination and virus testing as a condition of private employment, or to deputize employers to enforce that mandate on its behalf.”

Biden cannot just commission an organization to act as his secret police. Congress is the entity that has the power to create laws. But Biden still thinks and acts like a dictator as he continues to try to bypass Congress.

More people are getting on board and fighting back against the president. Several members of his party have voted to repeal the vaccine mandate because it has proven to be unconstitutional and proven to destroy the economy. The old man is trying to walk a dangerous path but keeps stumbling like he tries to board Air Force One.