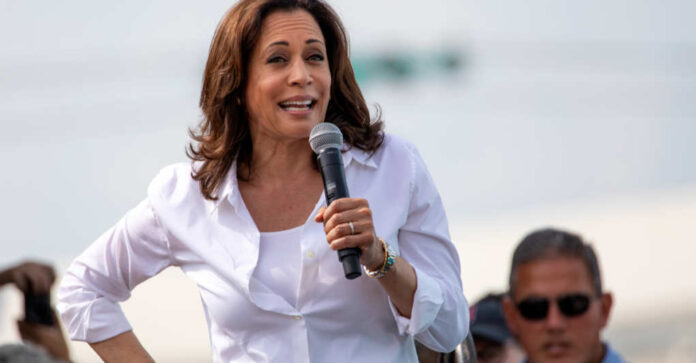 We all know that liberal politicians like Vice President Kamala Harris, as well as her boss, Joe Biden, don’t hold any affection for the administration preceding them in office. In fact, at nearly every turn, the pair, and more specifically, Biden, has made it a point to undo everything Donald J. Trump and his staff touched. From immigration, foreign trade policies, healthcare, education, the energy industry, and certainly COVID, Biden has at the very least attempted to have Trump’s ideas overturned.

And the vice president isn’t much different.

Remember when she and Biden were campaigning for their current titles? She said, should Trump come up with and suggest a vaccine for COVID, she wouldn’t take it simply because it came from him.

However, when it comes to things clearly marked as triumphs and accomplishments, it seems Harris and her ilk don’t really have a problem claiming those of Trump’s as her own.

At least that’s what happened at a recent Treasury Department event.

Treasury Secretary Janet Yellen and Harris joined forces to announce an $8.7 billion program to hand out loans to minority-owned and small businesses throughout the US. Supposedly, it’s part of Biden’s broader effort to help the American economy and give back by supporting smaller communities.

But aside from announcing the program, Harris seemed to imply that one of Trump’s best-known achievements was actually hers or the Biden administrations.

Enter the Paycheck Protection Program, which the Trump Administration designed to help small businesses during the COVID pandemic.

However, according to Harris, “we did” that, not Trump.

In a rather roundabout way, she explained that small businesses are the “economic lifeblood” of our nation and our communities. And that means that supporting them and helping them to succeed is just crucial. Then she said that’s why she did what she did “with the PPP program.”

“And what we did with the PPP program, and also what we did to recognize how previous outreaches, particularly to minority and women-owned businesses, have not worked, and so let’s do a better job of engaging them, and the long-term goal there was that through what we did to better engage in a rescue approach would be what we would do to engage in terms of a continuing investment approach.”

So, in her mind, their new program for small businesses is just part of the greater “PPP program” she helped to create and was such a success.

The only problem is that she didn’t, in fact, do anything to create the Paycheck Protection Program.

That was all the Trump administration, which she clearly wasn’t part of. The PPP was part of the much larger CARES Act, which Donald Trump signed in March of 2020, clearly over half a year before Harris entered the White House.

I guess, technically, she was a senator then and did vote to pass it through, as did everyone else in the Senate. But still, I hardly think that’s grounds for claiming the accomplishment as her own.

Oh, I guess there’s another small problem as well.

Remember all those small businesses that were literally burned to the ground, robbed, or became the target of rioting all throughout last summer? Well, it just so happens that Harris was one of the biggest names in support of those riots and civil unrest. In fact, she even publicly fundraised to collect bail money to get the perpetrators out of jail. You know, the same people who threw bricks through small business windows, started fires on their lawns and stole millions in products and merchandise.

And yet, now she has the gall to act like she’s trying to save those same small and minority-owned businesses.

Whatever can get Harris more name cred and success, right?

Although, at this point, I guess I can’t blame her. Currently, there’s only one vice president in the history of the US that was possibly worse than she: the infamous Aaron Burr, who served under President Thomas Jefferson and then later shot and killed his rival, Alexander Hamilton. Although the shooting took place as a dual, which was far more acceptable then, given the times.

The same cannot be said of Harris’ traitorous nature.