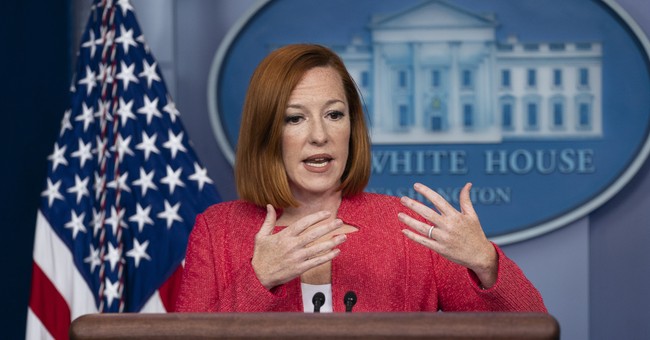 After several Democratic lawmakers suddenly came down COVID despite being vaccinated, there were questions about a possible outbreak at the White House.

White House Press Secretary Jen Psaki was quizzed on the matter today. She was asked if there was an outbreak at the White House, the National Security Council, the State Department, or the Treasury and whether Joe Biden had been in close contact with a COVID-positive person.

Psaki didn’t deny it and tried to deflect the question.

“The president has a full schedule today and is not in need of quarantine,” Psaki responded. “We will provide information to all of you as outlined with our commitment from just a few months ago about being transparent about close contacts. I don’t have any updates for you at this point in time, but again, we expect there to be breakthrough cases across the country, right? And certainly in the federal government.

“And the most important thing to note for you and for others is that 99% or more at this point of the White House staff is vaccinated,” she continued. “Boosters are strongly recommended and distributed. We have a very thorough process here that people abide by, who are going to have close contact with the president and even beyond that, and those protocols go above and beyond CDC guidelines.”

The reporter pressed Psaki further, asking, “So, you’re not going to say whether or not there’s been a significant outbreak in the various different parts that I mentioned – NSC, State Department, Treasury?”

“Again,” Psaki replied, “I point you to different agencies to give any additional information, but I would just note that we do expect there to be breakthrough cases, as there will be across government.”

She never answered the question.

A couple of problems with her response? Biden didn’t have a full schedule. His day appeared to end at 1:30 p.m.

Then as I noted the other day, the CDC guidelines don’t require you to quarantine if you’re vaccinated and you’ve been exposed to someone who has COVID. Dr. Anthony Fauci said it on Meet the Press yesterday when he was trying to clean up the mess that Kamala Harris made about the administration not being prepared for the variants and it’s the official CDC position. Now, to me, that doesn’t make a lot of sense, given the prior dictates. But what it means is that Psaki could then say Biden does not need quarantine — under these standards — even if he had been exposed.

Finally, Psaki was asked if Biden would be taking questions after his speech tomorrow about COVID. Her answer was glib in the extreme. It “depends on what you ask,” she said snippily.

Notice that she does something at the end of her remarks that she rarely does — she masks up. So that looks like something is up.

As I write this, now they’re confessing Biden was in contact with a staffer who had COVID, so that shows you just exactly how lacking in honesty they are when Psaki was answering earlier. These people and their lack of transparency!

The president was in close proximity to the “mid-level staff member” for about 30 minutes on Friday during an Air Force One flight from South Carolina to Pennsylvania, officials said.

Before boarding the plane, the staffer, who is fully vaccinated and boosted, tested negative for COVID-19.

By Sunday, the aide developed symptoms and was subsequently tested Monday, according to the White House.

They were probably waiting to be able to say that he tested negative. But he didn’t quarantine so if he had been positive, how many people would he have exposed? And he doesn’t have two negative tests yet. They’re saying he will carry on his regular schedule.