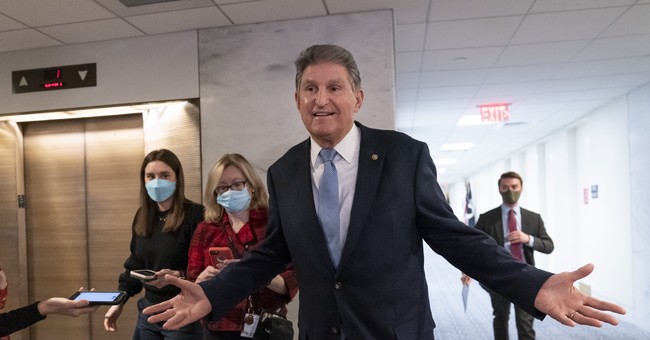 Yesterday, Sen. Joe Manchin (D-WV) finally had enough of being bashed over the Build Back Better bill and decided he just wasn’t going to play that game anymore, officially saying he was a “no” on the bill.

The meltdown from the White House was something to behold. They didn’t seem to care that they were potentially burning their bridges with Manchin as they attacked him, accusing him of going back on his word and falsely claiming that he had reached an agreement with Joe Biden on the bill. Manchin has consistently said publicly that he was not in agreement — that he had issues with a variety of things in the bill, but chiefly the expensive price tag.

But Manchin was talking today and he’s laying the blame for the failed negotiations on the “inexcusable” actions of the White House staff, that drove him to his “wit’s end.”

“It is not the president. This is staff,” the West Virginia Democrat told home-state radio host Hoppy Kercheval.

“And they drove some things, and they put some things out, that were absolutely inexcusable. They know what it is.”

Manchin continued: “I’m always willing to work and listen to try. I just got to the wit’s end and they know the real reasons what happened.”

White House Press Secretary Jen Psaki put out the statement essentially accusing him of lying. Staff who likely were involved in trying to broker the bill would have been the White House director of legislative affairs Louisa Terrell, White House Chief of Staff Ron Klain, Domestic Policy Council Director Susan Rice, and Counselor to the President Steve Ricchetti.

“I knew what they could and could not do. They just never realized it, because they figure surely to God we can move one person. Surely, we can badger and beat one person up,” Manchin said on West Virginia MetroNews, his first response to the blowback he’s taken from the White House and Democrats for tanking Biden’s signature legislation.

He added: “Well, guess what? I’m from West Virginia. I’m not from where they’re from, [where] they can just beat the living crap out of people and think they’ll be submissive.”

Manchin said he’s not going to put through anything without an official committee process which the Senate hasn’t done on this bill.

So what has the reaction been to this?

Senate Majority Leader Chuck Schumer (D-NY) is claiming he’s going to call for a vote in the New Year despite what Manchin said, to put everyone on the record. They may hope that they can move Republican senators if they can’t move Manchin. Some of the GOP senators have shown that they can be duped by the Democrats in the past.

People like Rep. Alexandria Ocasio-Cortez (D-NY) have attacked Manchin and encouraged Biden and the Democrats to find ways around his refusal and end-run not being able to pass the bill.

Now it also sounds like some of Manchin’s colleagues are attempting to run a smear campaign against him.

Manchin has told several of his fellow Democrats that he thought parents would waste monthly child tax credit payments on drugs instead of providing for their children, according to two sources familiar with the senator’s comments. […]

Manchin’s private comments shocked several senators, who saw it as an unfair assault on his own constituents and those struggling to raise children in poverty.

Manchin has also told colleagues he believes that Americans would fraudulently use the proposed paid sick leave policy, specifically saying people would feign being sick and go on hunting trips, a source familiar with his comments told HuffPost.

Chances Manchin said that? Slim and none. You’re talking about a guy who’s very careful about what he says publicly and has always spoken for the interests of West Virginians. I don’t have to agree with all his positions to see a hit job to punish him for being against Build Back Better. When there are just “sources” without their names on it, they’re cowards trying to hurt him. They know it will be spread and they won’t be held accountable.

But that’s only going to make him dig in more and if they want to push him into Republican hands, they’re doing a great job.