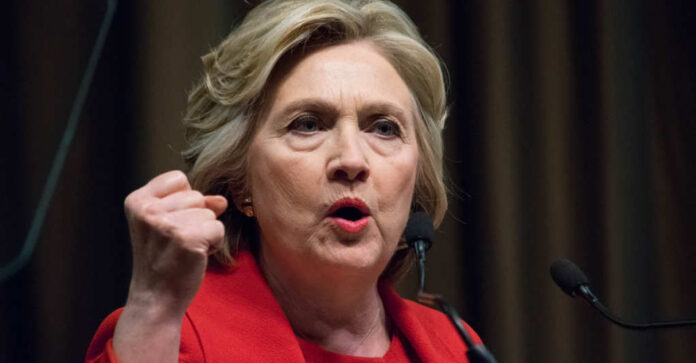 Running off at the mouth is something Hillary Clinton is well known for. No matter the topic she has her opinion and likes to make it well known. These opinions are largely not in keeping with the American aesthetic and what the country wants to see happening. She also tends to bring things up long before anyone is really focusing on it. We still have the 2022 midterm elections to go, and yet here she is all wound up about Trump in 2024.

Speaking with ‘Today’ on NBC, the former first lady and presidential candidate had some delicious little sound bites to offer about the next election. “If I were a betting person right now, I’d say Trump is going to run again. He seems to be setting himself up to do that, and if he’s not held accountable, then he gets to do it again. I think that could be the end of our democracy. Not to be too pointed about it, but I want people to understand that this is a make-or-break point. If he or someone of his ilk were once again to be elected president, and if especially if he had a Congress that would do his bidding, you will not recognize our country.”

It’s interesting how one person so hell-bent on destroying this country from the inside out will go to such lengths to lie, cheat, manipulate, and rig things to go the way of her party. There has been nothing that she or her husband have not been willing to do to keep themselves cemented into the positions of power they buried so many people to get to.

How this woman was good enough to run back in 2016 is beyond comprehension. The Democrats had candidates that at least made SOME sense on the surface. She made absolutely none, and yet they wanted her to go against the only many in the election who was not a career politician, who had new ideas, and wanted to shake things up. Then she wonders why she lost, and now wonders why he might want that position back.

The whole cry of ‘a Congress to do his bidding’ is laughable at best. Much like Biden is now seeing with some of his Democrats, some people fall on the party line but won’t vote straight down the party ticker. I know it’s weird, but that does happen, and it happens a lot. These people are the saviors by not blindly going along with the rest of the herd, and they want the change we were promised. They work tirelessly to get it too.

Interestingly enough, Hillary had more to add to her earlier words of wisdom too. “I tried to warn people. I tried to make the case that this was really dangerous — the people he was allied with, what they were saying, what he might do. I do think, but for Jim Comey and the stunt he pulled 10 days before the election, I would have won. I feel terrible about not stopping him and the people around him, but I feel like now everybody can see for themselves what kind of leader he is.”

Nobody cost you the election but yourself you leftist pig. You put together a failed ‘set a course to coast’ agenda and it went the wrong way for you and what you wanted. Yet you did nothing to adjust fire. You counted on your silent supporters to rally behind you like they did your husband in elections past. Unfortunately, political support is not like money; you don’t get it just by marrying someone. Yes, you won office in NY. In a district where a went dish sponge could win if it was a registered Democrat. Perhaps if you worked as hard as that sponge people would respect you.