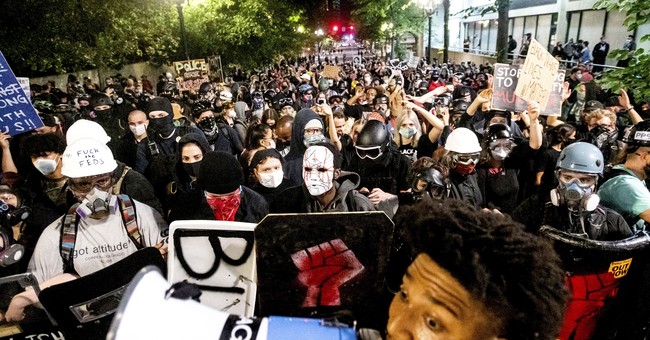 One of the founding ideals of the United States was that the same system of laws would apply to everyone equally. Two people convicted of the same or similar offense, all things being equal, should receive approximately the same punishment. It doesn’t always work that way; wealth and fame do have a way of making crimes, like murder, go away, but those instances are anomalies. Over the last four years, though, things have started to come unglued. The courts willingly cooperated with the obscene persecution of Michael Flynn. Department of Justice functionary Andrew Weissmann was able to weaponize the judicial apparatus to carry out his personal vendetta against Paul Manafort and President Trump.

Since the summer of 2020, though, it has become blatantly obvious that we have a two-tiered justice system in this country, and your personal politics determines how the courts treat you.

When Jake Angeli, the Buffalo Headdress guy, was convicted of little more than trespassing in the US Capitol on January 6, he received a sentence of 41 months in prison. Two other January 6 participants, Robert Palmer and Scott Fairlamb, were sentenced to 63 and 41 months respectively for assaulting police officers during the rioting outside the US Capitol. Finally, Ashli Babbitt was summarily executed for banging on a door while US Capitol Police riot control officers were just feet away.

Compare and contrast what happens on the left.

Antifa goonlet Dakotah Ray Norton gave a federal officer a beatdown with a baseball bat during the Portland Riots. He got 24 months.

This guy got “time served” and probation.

Note the absence of any charge related to possessing a firearm while committing a felony.

A 28-year-old Bellingham, Washington woman was convicted today in U.S. District Court in Seattle of violence against a railroad carrier, announced Acting U.S. Attorney Tessa M. Gorman. Ellen Brennan Reiche, was one of two people arrested on the BNSF Railway tracks near Bellingham, near midnight on November 28, 2020. Reiche was convicted of placing a ‘shunt’ – a device that interferes with train signals – on the tracks. The jury deliberated about three hours following the two-day trial. Reiche faces up to 20 years in prison when sentenced by Chief U.S. District Judge Ricardo S. Martinez on December 17, 2021.

According to records in the case and testimony at trial, on the night of November 28, 2020, Reiche and co-defendant Samantha Frances Brooks, 24, were observed on video surveillance walking on the tracks near a crossing in Bellingham. Whatcom County Sheriff’s deputies responded to the scene. The defendants were detained for trespassing, and a shunt was found on the tracks near where the deputies had first encountered them. Reiche was carrying a paper bag containing wire, a drill with a brush head, a magnetic adhesive and gloves. The wire was similar to the wire used in the shunting incidents. The shunt that was placed on the tracks could have interfered with the railroad crossing guard at Cliffside Drive in Bellingham. A train carrying crude oil, among other cargo, was scheduled to come through that area soon after this incident.

In her closing argument, Assistant United States Attorney Sok Jiang told the jury, Reiche “disrupted the signal system designed to stop trains from crashing into each other or crashing into cars…. A car driving through the intersection (near the shunt) would not have warning that a train was coming.”

Co-defendant Brooks pleaded guilty July 9, 2021, to interference with a railroad signaling system. Brooks faces up to 20 years in prison when sentenced by Chief U.S. District Judge Martinez on October 8, 2021. Chief Judge Martinez will determine the appropriate sentence after considering the U.S. Sentencing Guidelines and other statutory factors.

What do you think she got for being caught in the act of attempting to wreck a train and being a suspect in 41 other similar incidents. Twelve months.

Contrast that to people who have been held without bond for nearly a year because they accepted an invitation by Capitol Police to enter the building, and for whom neither bond nor a trial date is in the works because the federal government is deliberately dragging its feet on producing evidence that would permit trials to take place. Keep in mind that the overwhelming majority of the people held on January 6 charges are accused of nonviolent offenses.

Finally, how much interest did any federal agency show in rounding up the Portland demonstrators or other violent demonstrators versus the nationwide hue-and-cry to track down anyone in the Capitol on January 6 and hold them without bail?

It isn’t just the federal level where this crap takes place. Kyle Rittenhouse was tried for murder for defending himself. Fortunately, the prosecutors were mouthbreathing imbeciles who got their law degrees at a K-Mart Blue Light Special. Somehow a convicted felon carrying a concealed weapon without a permit was allowed to walk free. Also allowed to go free was a man who kicked Rittenhouse in the face.

When Steven Baca was assaulted and beaten by a violent leftwing mob in Albuquerque and lit one of the cretins up, he was charged with a crime (Howling Leftwing Mob Tries to Murder a Man in Albuquerque but They Don’t Count on Him Defending Himself). The people who beat Baca have never been charged.

In both those cases, the men beaten by a leftwing mob were charged with crimes even though there was a mountain of exculpatory evidence available to the police in real-time. In both cases, none of the assailants were charged with anything.

What do you think should happen to an FBI attorney who forged evidence so a federal judge would approve an intrusive surveillance warrant? Kevin Clinesmith did just that (BREAKING: FBI Lawyer Kevin Clinesmith Sentenced to Probation for Creating False Email Connected to Carter Page FISA Warrant). He lied in an attempt to ruin the life of a man who he knew was innocent but whose politics made him a target for Robert Mueller’s goons, particularly Andrew Weissmann. Clinesmith got 12-months probation. The DC bar did not take action to disbar him. They didn’t even start disciplinary procedures until five months after he was sentenced. Now he has been restored to “good standing,” which means he can again practice law. Imagine that happening to a conservative lawyer.

The US Court website has this to say about “the rule of law.”

The American democratic system is not always based upon simple majority rule. There are certain principles that are so important to the nation that the majority has agreed not to interfere in these areas. For instance, the Bill of Rights was passed because concepts such as freedom of religion, speech, equal treatment, and due process of law were deemed so important that, barring a Constitutional Amendment, not even a majority should be allowed to change them.

Rule of law is a principle under which all persons, institutions, and entities are accountable to laws that are:

This no longer exists in the United States. People are prosecuted according to their politics, not their crimes. If you set off explosive devices, try to wreck a train, or give a cop a beatdown and you are Antifa or related scum, you probably won’t be arrested. If you are arrested you will be released without bail. If, by some misfortune, you are ever prosecuted, you are looking at the equivalent of a wrist slap.

On the other hand, if you are a rightwing demonstrator, you will be harried to the ends of the earth. You will be held under a hefty bond, assuming one is even permitted. Even if your behavior was lawful and is documented on video, you will be charged with a crime. If you plead guilty, the book will be thrown at you.