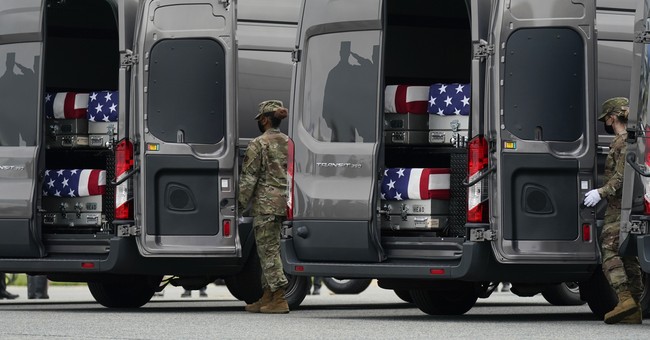 Nazi Minister of Propaganda Joseph Goebbels is credited with the following quote.

“If you tell a lie big enough and keep repeating it, people will eventually come to believe it.”

Although there is no evidence Goebbels ever said it. The original description of “The Big Lie” did, however, appear in Hitler’s Mein Kampf. Regardless, America, we are in the midst of our own big lie. A big lie that couldn’t be more disgusting.

That big lie is the administration’s continuing attempt to rewrite Biden’s Afghanistan debacle.

As we reported earlier this week, Jen Psaki, the ever-arrogant White House press secretary, snottily bristled when asked about Americans abandoned behind Taliban lines when final U.S. forces precipitously left the country — without so much as even alerting our NATO allies and their forces in the country.

The United States does not track or put a tracker on American citizens traveling overseas … that would be quite a Fox News story, wouldn’t it be if we did that?

Standing here in December, that strategic decision remains the right decision. For the first time in 20 years, there are no U.S. troops in harm’s way in Afghanistan this holiday season.

Stop the tape. Harm’s way? None of the purposely abandoned Americans remaining at the mercy of the Taliban were available for comment. Sullivan continued:

We safely and effectively drew down our diplomatic presence; we lifted tens of thousands of vulnerable Afghans to safety, in a unique American example of capacity, commitment, and sheer logistics…

Uh-huh, except for those “vulnerable Afghans” who died after clinging to transport aircraft hurriedly fleeing Hamid Karzai Airport in Kabul. Speaking of the Kabul airport, the “sheer logistic” decision to walk away in the middle of the night from Bagram Air Base was beyond stupid — and proved to be disastrous.

And, Mr. Sullivan? Have you heard from any of the Afghans facing horrific torture and death at the hands of the most ruthless terrorist organization on the planet? You know, the nasty group with a fondness for burning women alive and “marrying” 12-year-old girls?

Or, Mr. National Security Advisor, have you heard from any of the 13 Americans killed — several of their coffins are shown in my feature image — in the Kabul terrorist attack, along with untold numbers of Afghans, as Biden’s safe and effective drawdown was underway? Have you no shame? Never mind.

So ‘The Big Lie’ continues. And it will continue, as the quote at the top suggests.

The problem for the Biden administration is we saw it play out on TV. We know abandoned Americans remain in harm’s way. We know the horror left to untold numbers of Afghans who helped our forces.

We will see the threat to America caused by the Biden Afghanistan Debacle. It was never about leaving Afghanistan and removing American forces from harm’s way. It was always about how we left. To suggest that how we left was safe and effective is laughable in its obscene dishonesty.

Then again, what did we expect from Team Biden?