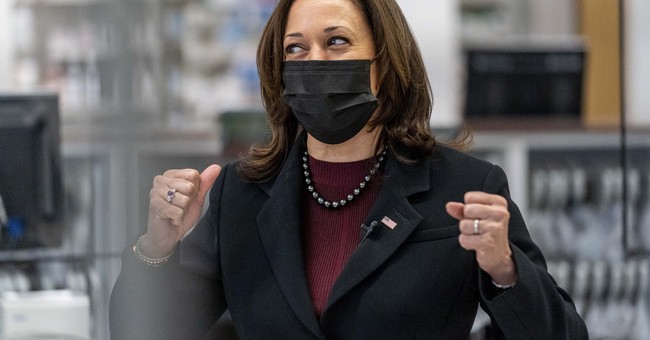 I have never seen a worse politician in my life than Kamala Harris. And I live in a world where Eric Swalwell exists.

Of all the “I can’t believe this is happening” things that have happened over the last two years, the “I can’t believe this is happening”est of all is that the woman who couldn’t break 3% in her own primaries, and couldn’t even hang in the race long enough to make it to Iowa, is now just one airplane staircase accident away from the most powerful office in the world.

I have truly never seen a more inept politician than Kamala Harris. And I live in a world where Joe Biden exists.

However, even Joe Biden and Eric Swalwell are savvy enough and/or powerful enough to get out from under their own ineptitude. Swalwell at least understands the legacy media enough to know that if he stays under the radar, stories about his sex romp with a Chinese spy will eventually peter out. Joe Biden at least understands that having good handlers is just as essential as having a good handshake. Plus, he has a wife who can cover for him when he’s losing touch with reality. Guys like Biden and Swalwell might be bad people, but they’re at least mediocre politicians.

Kamala Harris seems to have a knack for blunder. That’s not even the worst of it, because Biden is a serial blunderer himself, and yet he’s managed to remain a beloved Democrat figure at least until quite recently. Harris doesn’t have the personality that might allow her supporters to overlook her failures as a leader. She doesn’t have the instincts needed to dig herself out of the holes she creates, and she’s too arrogant or too stupid to even let her staff dig her out.

Case in point — a recent interview with popular host Charlamagne Tha God. It’s no secret that Black Democrats are becoming extremely resentful of the current administration. They spent four years listening to the legacy media tell them that Donald Trump was Literally Hitler(TM) and that he hated Black America. They understandably assumed that if they stepped up to help boot Trump their efforts would be rewarded with a renewed advocacy from the “good guys.” Instead, many are finding themselves wondering if Trump actually did more for the Black agenda than the people who claim to own the Black agenda.

Spoiler alert: He did.

How does that cliche go? If you’re explaining you’re losing?

How bad of a job are you doing if you have to insist over and over again that you’re the one in charge?

Harris’ staff tried their level best to save her from herself by butting in and pretending that the sound was going out, but she is so clueless she charged right ahead like a bull in a china shop. Charlamagne was having none of it, and what should have been a friendly media stop turned contentious, all because Kamala Harris is a moron. I’m sorry if that sounds harsh, but she really is terrible at this. My colleague Bonchie describes the encounter perfectly.

What’s so silly about that is that the question she was asked was meant to be friendly. It was a softball over the plate for her to smash into the outfield. All Harris had to do was calmly explain that they are negotiating with Joe Manchin and that they believe they can get their agenda through soon enough. Instead, she latched onto a perceived slight that wasn’t even meant to be a slight, and her ranting and raving about it was just a terrible look. Her skin is so thin that it’s translucent.

But even putting aside how ill-advised Harris’ behavior here was from a public relations point of view, the big takeaway for me is how insecure she is. We’ve known for a while that Harris’ camp and the White House have been feuding, and this interview really served as a window into the effects of that. Her angry, defensive disposition in the face of a friendly interviewer exposes a severe lack of personal confidence.

But here’s the real sign that Kamala Harris is the worst politician ever. This past week, she appeared in a video on one of the most popular hip-hop culture sites in the nation, The Shade Room. In it, Harris directly addressed “the roommates” about a very important issue…lead paint. Her tone is reminiscent of that awful NASA spot she did with those child actors. You know the one. Her demeanor is almost defeated. All I could think about while watching it is that the White House must really hate Kamala Harris. They know that the base is fuming right now, and they send her out to do this.

No need to watch the whole video (below). It’s the comments that you should pay attention to, keeping in mind they are coming mostly from Black people. When your own base thinks you are the absolute worst, you are, indeed, the absolute worst.

Some of the best comments:

Kamala Harris is a historic politician, and her camp promised she would be the next Barrack Obama. It’s looking more like she’s the next Joe Biden; and for the first woman and first “woman of color” to hold the vice-presidency, that’s probably the absolute worst thing you could be.

That’s because Kamala Harris is literally the worst politician I have ever seen in my life.