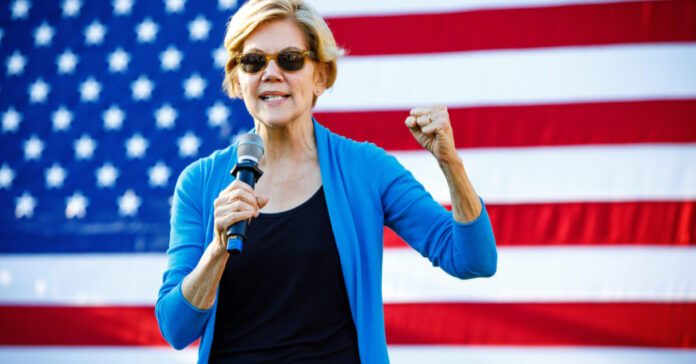 The Democrats, brainwashed by Joe Biden’s rhetoric, are constantly looking for ways to fund his ever-growing socialist programs. The president has already lied about the middle class of people not being taxed. And now it seems that Elizabeth Warren has stuck her nose in the mix and demanding that a 15 percent tax be applied to every company that earns $1 billion or more in the year.

Her plan calls for the 15 percent to be a minimum amount that all businesses will have to pay. She reasons that Joe Biden will need the money to fund the public handout programs that he has secretly installed around the country.

Elizabeth Warren is as red as a communist can be. She upholds the socialist principles like they are a form of their holy bible. Warren claims that the major corporations have somehow changed the tax code to fall into their favor. She does not understand that all they have done is make the tax work for their advantage by using the avenues provided in the tax code to minimize how much they pay in taxes.

Warren’s socialist mindset believes that all the revenue a company makes should be up for grabs by the United States government. Her socialist staff went on to release a report that detailed how several companies could avoid paying taxes. The businesses could redirect the money into areas that are considered untaxable incomes. But Warren thinks that she should cut the profits even though she does not work for them.

Warren is calling her greedy idea the “Corporate Profits Minimum Tax.” It is her way of stating that if any corporation earns an income, she will show up and take her cut for Father Biden.

Her statement went on to boast that “In addition to making our tax code fairer, the CPMT will generate $319 billion over the next decade to invest in the American economy and support America’s workers and families. The CPMT is a core component of President Biden’s Build Back Better agenda, and requiring these companies to pay their fair share in taxes will help fund transformative investments in our country: universal pre-K, child-care, paid leave, tax credits for families, expanded Medicare coverage, and more.”

Warren was not even trying to hide that the tax would pay for all the social programs she would love to impose on people. And she believes that now is the time to push for the tax since the president in office cannot stand up for the country and protect it from socialism and communism.

Her little report named no less than 70 different companies that would fall victim to her greed. And yet, with her push to overtax the top companies, Elon Musk from Tesla and others are fighting back by claiming the Biden administration does not have what it takes to use that kind of money effectively.

Musk is a self-made billionaire who has proven to be good with money and investments. Warren does not know how to handle the kind of money that Musk has earned, let alone use it wisely.

Biden’s idea of making America better fringes on the boundaries of socialism. Donald Trump had already put the country on a path that would have kept America growing for years to come. But Biden seemed happy to kill all of that off and institute his version of the socialist approach. Biden seeks to empower governmental agencies around the country to monitor and penalize Americans for earning too much money. The president and his administration cannot seem to leave people alone to live their lives free.