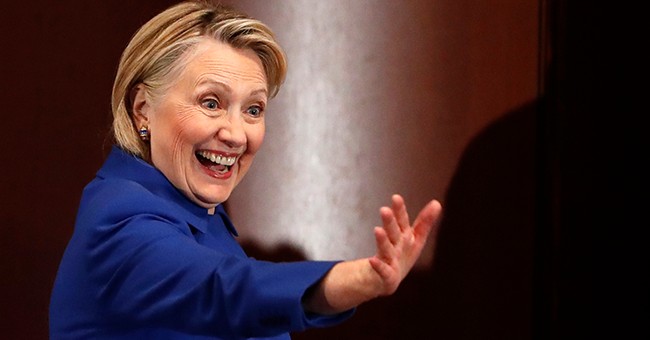 Hillary Diane Rodham Clinton. There’s never been anyone quite like her in American politics. Certainly, there hasn’t been a worse presidential candidate since Democrat George McGovern lost the 1972 election to Richard Nixon in a historic landslide. And then there are Hillary’s accomplishments to consider.

P.S: Job titles are not accomplishments.

To be fair, Hillary has been so ridiculously propped up and revered through the decades by the likes of CNN, MSNBC, The New York Times, and other Democrat mouthpieces, one cannot entirely blame the former presidential candidate who called half the country a basket of deplorables for remaining a silly legend in her own mind to the extent that it’s “almost like” she’s never going to go away. Ever.

So there you have it. A delusional legend who steadfastly believes the 2016 election was stolen from her, and nonsensically hangs on to the silly notion that she and she and alone can save America. Hence, Hillary Diane Rodham Clinton has once again thrust herself into the left-wing spotlight.

As we reported earlier in the week, the hood ornament (along with Nancy Pelosi) of the Democrat Trump Derangement Syndrome short bus is once again (still) obsessed with Donald Trump, warning that a Trump win in 2024 would surely be “the end of our democracy.”

If I were a betting person right now, I’d say Trump is going to run again. He seems to be setting himself up to do that, and if he’s not held accountable, he gets to do it again.

I think that could be the end of our democracy (a recurring Hillary theme). Not to be too pointed about it, but I want people to understand that this could be a make-or-break point.

If he or someone of his ilk were once again to be elected president, especially if he had a Congress that would do his bidding, you will not recognize our country.

I tried to warn people. I tried to make the case that this was really dangerous — the people he was allied with, what they were saying, what he might do. I do think but for Jim Comey and the stunt he pulled 10 days before the election, I would have won.

So that brings us to now.

Yup, according to multiple reports and a fair amount of wishful thinking on the left, Hillary, convinced that Trump is running, wants a rematch. Bigly. Who knew?

Former Fox News host Bill O’Reilly, as transcribed on Wednesday by The Hill, said Hillary’s recent appearances are based on her belief that the wheels will continue to fall off the Biden presidency — a sure bet — and she sees it as an opportunity to even the score with Trump.

Hillary Clinton wants the nomination. She knows the Biden administration is falling apart, which is why you’re seeing her surface right now. So it could be a replay. But voters make up their own mind.

Columnist and Fox News contributor Joe Concha in a Wednesday op-ed suggested Hilary might be a good choice for Democrats in 2024, in large part do other even worse options.

2016 Democratic nominee Hillary Clinton is an interesting prospect to consider when looking for a viable candidate, particularly if an 80-something President Biden decides not to seek a second term. And why would he?

Just 22 percent of voters want him to seek a second term, according to a I&I-TIPP poll.

It doesn’t get much better when polling only Democrats, where just 36 percent want to see the president run again, with that juggernaut candidate named “someone else” coming in first with 44 percent support.

If those are the options, why not Hillary? She’s 74 years old, which is like being bathed in the fountain of youth compared to Biden. And she’s still stunned — five years later — that she actually lost to Donald Trump.

In fact, she sounds no different than Trump in constantly complaining about all the reasons she lost and that, well, the election was stolen by Trump and the Russians anyway.

That type of rhetoric is a big no-no for Trump, but A-OK if Hillary (or Stacey Abrams) does it. Rules are rules.

One more possible sign that Hillary is dipping her toe in the 2024 pool comes in the form of her bizarre decision to read her 2016 victory speech for something called “Masterclass.” It was one of the most cringeworthy things you’ll ever see.

Instead, here she is, a losing candidate reading a five-year-old victory speech. And in case you’re asking if any losing presidential candidate had done anything like this before, the answer is no.

Ah, Joe, but Hillary is Hillary.

And remember, the lapdog media continues to fawn over her at every opportunity — real or contrived.

So it comes as no surprise that some of those lapdogs are already quietly beginning to do her bidding.

While measuring for Biden’s coffin in the meantime.