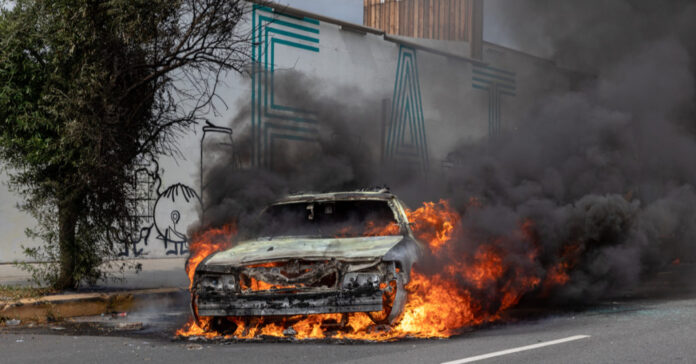 For those of you who think the crime waves of last year, brought on by decreased support for police and law enforcement, were slowing down and ceasing to exist, I give you the words of Los Angeles’s police union boss, James McBride.

As someone wholly intertwined with the area’s crime rates and the constant efforts to minimize them, McBride knows better than most just how bad it has become and how dangerous it is for just about anyone living or even visiting the City of Angels.

In fact, he says it’s so bad that it’s pretty much just like “The Purge” movies, except 365 times worse.

If you haven’t heard of these movies, you’re probably someone like me, who tends to shy away from horror films, and particularly ones oozing with blood and gore.

So let me give you at least a short synopsis of what the series depicts.

Basically, it’s based on a future where the government has decided that the answer to overpopulated prisons and jail cells, as well as high crime rates, is to simply let people indulge in their criminal fantasies for just one night every year. That night is called ‘the purge.’ And as you can imagine, it’s a rather terrifying one.

Everything from petty theft and arson to rape and murder is allowed. And after 24 hours, all those still in the land of the living get their sins forgiven and go back to their lives, albeit with quite a mess to clean up.

Now, to be clear, I’m sure there are a great many people who say that such a night might be good for us. If allowed in our nation, they see it as a way to cleanse us of the scum that chooses to prey on the innocent and delight in pain and suffering.

However, we all know that’s not exactly how it would go down. Sure, we might lose a few bad apples along the way, but those same rotten fruits could also do a lot of damage given 24 hours to fulfill their darkest desires.

And right now, that’s exactly what McBride says is happening in Los Angeles and has been for a while.

With police forced to sit along the sidelines, with limited personnel and resources, as well as hamstringing policies, the city is being overrun with crime. But unlike in ‘The Purge,’ it’s an everyday thing. It’s not just one night of crime and horror; it’s 365 of them.

McBride noted in a recent interview that things were getting so bad, in fact, that he’s warning tourists to stay away “because we don’t think we can keep you safe right now.”

He noted that one major problem was the zero-bail policies that California has allowed in recent years. Under these, he says people can “literally go out, do whatever you want, commit crimes, and you’ll be out faster than the officers can finish the report.”

There’s also the 2014 referendum enacted law, known as Proposition 47, that declassifies nonviolent property crimes from felonies to misdemeanors if the damage or value of what was lost remains under $950.

In tandem, the two work together as nothing more than a slap on the wrist and some inconvenient time spent at the police station.

Now, to be clear, Democratic California Governor Gavin Newsom did change things back in July, a bit, allowing prosecutors to charge those involved in organized criminal acts, such as the more recent ‘flash mobs’ participating in smash and grabs, with felonies should they choose to. However, either the prosecutors aren’t using this option, or it simply doesn’t matter much to the thugs concerned.

Such flash mobs have hit Home Depot, CVS, Nordstrom’s, an Apple store, and the Intercontinental Hotel in LA recently, with the last one netting some $100,000 in stolen jewelry, according to KCBS-TV. For the tourists that do visit the city, many have noted the heightened crime rates, and instead of walking the palm tree-lined streets to take in the California sunshine, most say they choose to Uber instead.

So much for painting California as a paradise, huh?