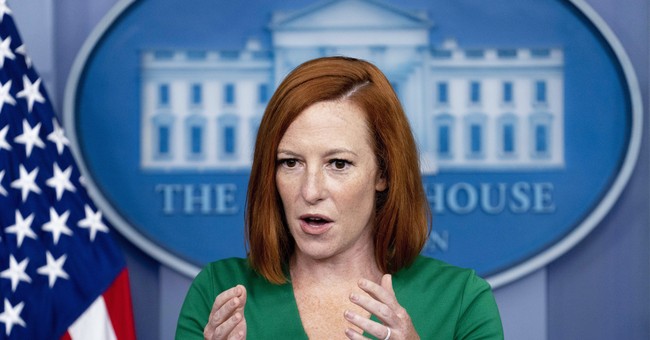 White House Press Secretary Jen Psaki said she had to consult with Biden on the question; she couldn’t even list an achievement or comment on the immense debacle that was Afghanistan.

Fox’s Peter Doocy then asked Psaki, “Why is it that there are still Americans stranded in Afghanistan?”

“Let me just reiterate something that Tony Blinken said back in August which is that if Americans who are in Afghanistan wanted to leave whether it was three weeks from now, a month from now, two months from now, back in August, we would help them get out and that is something we have delivered on our word on,” Psaki said. “Since that time we’ve directly assisted 479 American citizens, 450 lawful permanent residents and SIV holders and SIV applicants to depart Afghanistan.”

“Okay 479 left behind is a lot higher than the 100 to 200 that President Biden talked about at the end of August,” Doocy followed up. “How did you get the numbers?”

“There were people who determined they wanted to leave since then,” Psaki said.

First, the utter audacity of Psaki saying that “if Americans…wanted to leave.” Americans were screaming for help to get out since the U.S. pulled out. They didn’t just decide afterward; that’s just so much horse hockey.

Second, how dare they act as if they’re making great efforts, getting people out? If Americans have gotten out, it’s been largely through the help of private groups, with the Biden administration perhaps helping with their paperwork after they’ve gotten free. How dare they take credit for the work of others — while covering their own failures?

Third, Doocy pointed out very clearly how the numbers that they told us about only leaving about 100-200 Americans behind was a straight-up lie, just based on the White House’s numbers of the 479 Americans that they “helped” to get out. And still, there are more Americans left there, with thousands of Afghan allies still stuck as well.

Then Psaki makes an incredibly snotty comment that they don’t track Americans and that would be quite a story to Fox if they did.

But the Biden administration has also been trying to duck Congress on another big requirement concerning Afghanistan.

Congress had imposed a legal requirement on the administration that they had to provide a detailed breakdown of the status of the evacuation, including a listing of everyone it airlifted out of Afghanistan. They were required to provide the information two weeks ago, but they blew off the deadline without any explanation.

A senior lawmaker on the Senate Homeland Security and Governmental Affairs Committee told the Washington Examiner that they have not received any information from the government as of Monday, one week past the deadline.

“The Biden administration was required by law to report to Congress by November 30 on the composition and vetting of the Afghan evacuees — including who actually got on our planes and just how many special immigrant visa holders, and others who helped US forces and our allies over the last 20 years were left behind. It has failed to do so,” Sen. Rob Portman, the top Republican on HSGAC, said in a statement.

“The feckless nature of evacuation of Afghans has put our national security at risk, and I am troubled by the administration’s lack of responsibility or accountability on this issue,” Portman said.

H.R. 5305, the Extending Government Funding and Delivering Emergency Assistance Act , requires that the DHS secretary submit a written report 60 days after the enacted date that breaks down how many Afghans are in the country. The breakdown must include how many evacuees are at U.S. overseas bases or nonmilitary holding areas abroad, as well as the number of lawful permanent residents, SIV holders, SIV applicants, nonimmigrant visa holders, and refugee referrals.

They were also supposed to provide information on how many people had been flagged as security concerns and how much the costs of the ongoing operation were at that point, including the resettlement costs.

According to reports, Biden himself ordered them to evacuate “Afghans at risk” and “Families with women and children” — people who didn’t even have to have helped the U.S. or who hadn’t been previously vetted — to fill up the planes. The Congressional requirement would make them have to explain all that and how many were security concerns.

No wonder they don’t want to answer that. And the worst part of that is that they left thousands of who they were supposed to get out, Afghan allies to whom we owed and still owe an obligation.