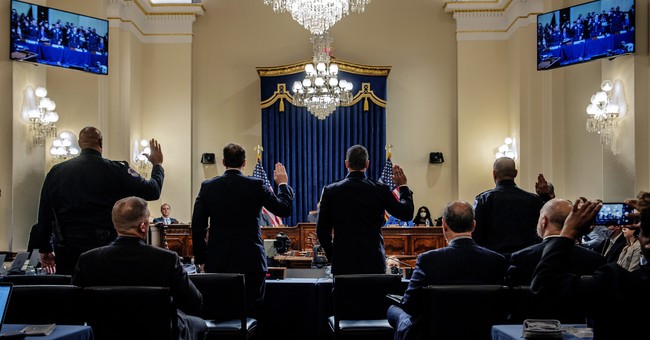 The commission continues to search for a reason to hold their meetings, at this point.

Today across the media landscape, the journalists were all alight; they finally had the goods on Fox News! As we detailed last night, Liz Cheney released a series of text messages from the records subpoenaed from Mark Meadows, showing communications on January 6 by a list of prominent conservative figures – including Donald Trump Jr. and a number of Fox News names.

They were imploring Meadows to convince Trump to issue statements to help end the attack on the Capitol, and Meadows responded to them how he was at the moment already engaged with the President to formulate that very type of announcement.

In other words, they were all calling for an end to the violence as it transpired, the very opposite of colluding with the attackers and plotting a coup. If the press wanted to have its smoking gun, in text format, they would be looking at comments like, “Congratulations Mark, the plan is working!”, not, as Laura Ingraham said, “Mark, the president needs to tell people in the Capitol to go home. This is hurting all of us. He is destroying his legacy.”

The press is behaving like they have been given a glowing chalice of never-ending over-flowing GOP-killing narratives when in truth this will prove out that there was no coordinated effort to send in Trump loyalists to overthrow the government. You can add this bombshell to the ever-widening field of undetonated duds which pollute the media landscape.

The January 6 commission has become a mounting disappointment for the media as they grind furrows into the flooring at their offices, pacing in waiting-room-style for any announcement that a newly gestated scandal has been delivered. Since the commission was formed this summer, there has been an assurance in many editor’s offices that something tangible and career rendering will arrive.

Since then hundreds of witnesses have been called, tens of thousands of documents collected, and thus far the most notable items to come out of the hearings has been from those witnesses telling the commission to go micturate up a flag pole.

Meadows has filed suit against Nancy Pelosi and the commission to block its subpoena power, citing insufficient amounts of membership as well as a lack of proper opposition party representation. Pelosi famously blocked a number of GOP names submitted by the minority leader Kevin McCarthy, as per House rules for Select Committees. As a result there are four fewer members as required, and the only GOP names on the commission are the Democrat sympathizers Liz Cheney, and the soon-to-be-evicted Adam Kinzinger.

What has driven the journalists to become borderline batty is that after five months or so, there has been nothing at all tangible coming out of this commission in the form of evidence of…anything substantial. This dearth of red meat to be tossed out from Congress means the press has been reduced to fabricating its own hysterical headlines, serving up wan stories with helium-inflated headlines which never left off.

Just before Thanksgiving, Rolling Stone delivered a Tofurkey story, claiming it found Trump organizers who used burner phones on the day of the riot to…uh, do stuff. It was pretty jarring to consider until you realize this meant that the news outlet that has been a recidivist news fabricator this year allegedly had intel not in possession of the Congressional Committee – nor the FBI, for that matter. So I was already cynically scoffing before, deep in the article, I tripped over this line:

There was no evidence the Kremers and the other rally organizers encouraged or planned violence in the group-text messages reviewed by Rolling Stone. However, critics have argued that Trump and the leaders who encouraged thousands of his supporters to come to Washington as the vote was certified deserve some blame for the violence.

Thank you for your input, Rolling Stone – now you can go back and sit at the kids’ table.

Mother Jones just came out with a blathering screed that accuses the entirety of the GOP of being behind The Big Lie, even including Glenn Younkin. He only managed to win the VA governorship by NOT invoking Donald Trump during his campaign, but sure, he is part of the threat to democracy as well.

The entire point of the piece is this – the press needs to ramp up the coverage of the January 6 riot next year. You know, because 11 months of incessant insistence this was a planned coup has not been enough. All that time, the public has not bought into the claims, so surely the solution is to give more of that kind of coverage.

The other tell that they are rudderless in this realm is that they demonstrate a clear issue in handling the facts. Very early in the piece, they blithely say that this year “began with a televised insurrection,” echoing so many others in the press who have already convicted the participants. You would think that after covering this story so ardently for a year they would come to realize that of the scores of people held as a result of the riot – a number approaching 700, by this date – that not a single person has been charged with insurrection.

At Bloomberg, Jonathan Bernstein has taken to directing the members of the committee on how they need to step things up and give the press some content. “The panel needs to tell the story of this uprising clearly and compellingly. So far, it’s failing.”

The best read on how well the J-6 commission is doing – that is, how poorly it is doing – was from The Atlantic this weekend, by Quenta Jurecic. Calling the unproductive process “weirdly static,” beyond the euphemism we see what is meant; very little at all has been accomplished.

The Justice Department has yet to announce any breakthroughs in untangling the planning of the attack or unveil any blockbuster charges such as insurrection or “seditious conspiracy.” In Congress, the select committee has yet to convene any public hearings or announce new discoveries since its inaugural July 2021 hearing.

That does not mean that all hope is dashed. The writer next expounds for nearly 2,000 words on what is hoped to be discovered and other ways the committee can deliver something the press can use. This is the mindset that has led the press today to behave as if they have Fox dead to rights – they are just so desperate for anything to come out of this committee by now that they are over-excited and under-analytical.

If the Stelter Set would take a breath for half a beat, they would process that Laura Ingraham, Sean Hannity, and others stating in text format that they want to bring a halt to the violence on that day, it would mean that they were not in fact behind the attack on the Capitol. That Don Jr. was echoing their pleas, and Mark Meadows was asserting they were in fact discussing how to curtail the violence, shows that coordination was not, in fact, in place. That has been the entire focus of the probe, and now they have shown that the major participants wanted to find a way to quell the uprising.

The press, in their emotional fervor to take down the accursed Fox News, are busy spiking the football on the 50-yard line, oblivious that in doing so, they have fumbled the ball. If this is the type of trenchant journalism they want to employ for the next year, even expanding on this kind of coverage, they are documenting what will be effectively the third failed impeachment of Donald Trump.