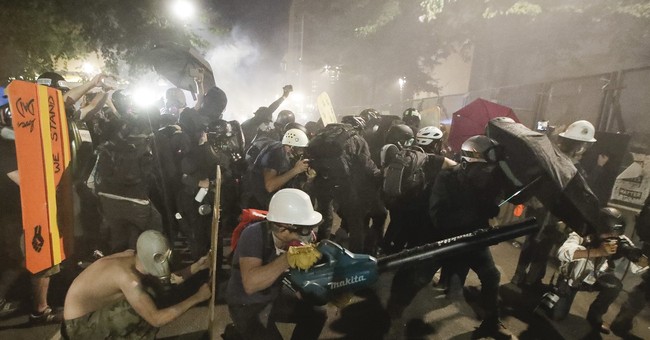 In New Jersey, cops have been disciplined over comments about Black Lives Matter.

The same is true of Sgt. Mandy Grey.

Mandy, in fact, was the first policewoman ever hired in Hopewell.

According to the decorated pair’s attorney, Frank Crivelli, neither have had any prior internal affairs complaints.

No matter, both are now embroiled in controversy.

It reportedly went as follows:

“Just checking in to say thank you to those that reached out to make sure I and my coworkers were doing okay as we worked the night shift this weekend. I’ve been kind of quiet regarding the protests and riots because, quite frankly, I couldn’t find the words. Last night as I left for work, I had my two kids crying for me not to go to work. I don’t think I’ve ever felt the way I did last night. And then I watched people I know and others I care about going into harm’s way. I love my police family like my own. So when you share posts and things on Facebook, I’d really appreciate if you’d THINK before doing so. I’ve seen so many Black Lives Matter hashtags in these posts. Just to let you know — they are terrorists. They hate me. They hate my uniform. They don’t care if I die.”

Not everyone appreciated her bashing of BLM(TM).

“On Monday, June 8, 2020 the township learned that multiple police officers and township employees had been accused of improper conduct involving social media. Those officers and employees were immediately placed on leave by the Chief of Police and Business Administrator.

“As we continue to investigate a recent Facebook post, please know that I am sorry for the hurt that this incident has caused our community. We understand that we have the obligation to make sure that our officers police in a manner that is fair and impartial.”

The Daily Mail notes that Sara was charged with misconduct in late July.

As for those placed on leave, the group included public servants and other officers who “liked” the post.

Following an investigation by the Mercer County Prosecutor’s Office, it was determined Sara’d committed no crime.

That put the ball back in the PD’s court.

In the meantime, Sara’s post — along with a semi-related discrimination lawsuit by another cop — resulted in town protests and a petition demanding change.

So how did Sara Erwin end up? She was fired.

The town council’s vote was unanimous.

For approving of the post online (reports are unclear as to exactly how) Sgt. Mandy Grey will be suspended for half a year.

The duo’s filed for appeals with Superior Court.

One basis: freedom of speech.

Aside from the Facebook and firing flare-up, it appears she was a beloved officer.

As noted by NJ.com:

Erwin is popular in the Hopewell Valley community, serving as a DARE officer in the school system, and was featured several times on the police department’s Facebook page for giving safety speeches and making other appearances and presentations for the department.

Sara’s certainly not the first to lose a job due to something on social media. But it’s a reminder of the times in which we live — it seems there is no “job life” and personal life anymore. The two are one and the same.

That’s far more true, I would guess, of police officers.

Meanwhile, the notion that cops are some sort of terrorists appears to garner a bit more respect:

Virginia Does It Again, School District Issues a List of Oppressed and Privileged Identity Groups