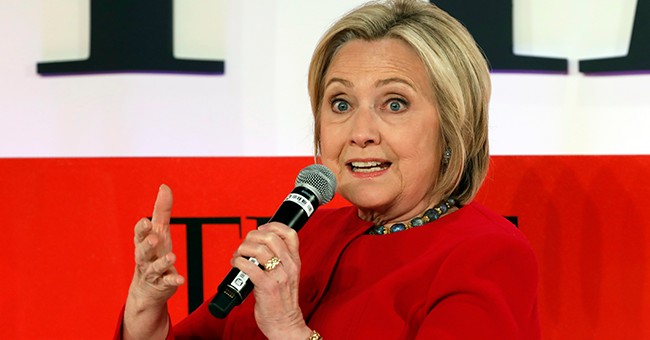 President Donald Trump is still living rent-free in the head of Hillary Clinton.

I would say it’s sad, at this point, but it’s also kind of hilarious. She still hasn’t gotten over it and she’s panicked he could win again against the feeble Joe Biden and the cackling Kamala Harris.

In an interview that aired over the weekend on Sunday TODAY with Willie Geist, Hillary Clinton said “If I were a betting person right now, I’d say Trump is going to run again.”

“He seems to be setting himself up to do that, and if he’s not held accountable, he gets to do it again,” the 74-year-old former secretary of state told Geist. [….]

“I think that could be the end of our democracy,” she said. “Not to be too pointed about it, but I want people to understand that this could be a make-or-break point. If he or someone of his ilk were once again to be elected president, especially if he had a Congress that would do his bidding, you will not recognize our country.”

We don’t recognize our country now because of the harm that Joe Biden and the Democrats have done to it over the past eleven months, not to mention the past four years. Hillary Clinton is the one who “attacked democracy” by paying for Russia collusion disinformation to harm her political opponent. Talk about undermining the election — she did everything of which she accuses Trump — and has continued to dispute the legitimacy of his election.

But she heroically tried to warn us of the evil orange man. She still doesn’t want to accept why she lost — that people didn’t want her, they wanted Trump. Instead, she falls back on blaming James Comey.

“I tried to warn people,” she said. “I tried to make the case that this was really dangerous — the people he was allied with, what they were saying, what he might do. I do think but for Jim Comey and the stunt he pulled 10 days before the election, I would have won.”

It was also James Comey who improperly decided to give her a pass, rather than charge her. It wasn’t his decision to make and she doesn’t want people to understand how much she benefitted from that.

Clinton continued in her interview with Geist:

“Clearly, there were people who liked what they saw, despite what I see as the real dangers to our country. They turned out and voted for him. And he’s trying to get it set up so that will happen again for him, even as he loses, as he did twice the popular vote.”

There she goes “attacking democracy” again. Trump won against her. He didn’t lose. The “popular vote” doesn’t determine who wins and when she denies the electoral vote is the determiner, she’s denying the Constitution and how our government operates.

She shows just how frustrated she is, and I don’t know about you, but it looks to me like she might be gearing up to run again. She’s likely so frustrated that old Joe got in instead of her even after all her machinations, it just must be eating her up inside.

But if we thought we’d have fun with a rematch of Joe Biden and Donald Trump, imagine if first, Hillary Clinton was trying to beat Joe Biden or Kamala Harris in a primary. That would be great fun as they rip each other up and then get decimated by Trump.