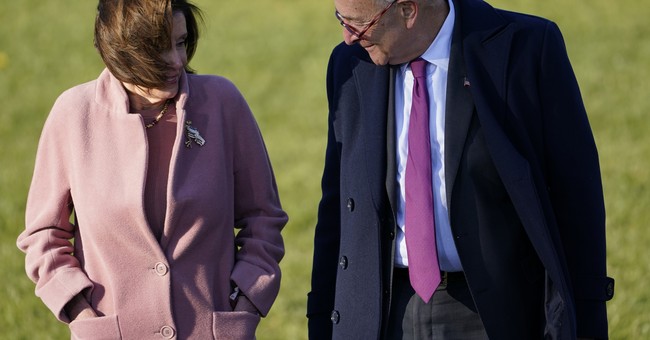 Joe Biden is one year short of 80 years old. He was answering to “Senator Biden” before I could vote.

Nancy Pelosi is 81. She’s been in Congress for more years than my eldest son has been on this planet. She entered Congress before the “World Wide Web” went live.

Chuck Schumer slouches like he’s spent too many years playing bingo at Leisure World. He’s the baby of the three — at 71.

Is being old a bad thing? Of course not, but the Founders didn’t intend or envision Federal governance being in the liver-spotted hands of people 80 or closing in on 80.

Without having plastic “work done,” all three would resemble an “On Golden Pond” reunion. In that movie, Henry Fonda played an old man in cognitive decline. He was 75 when it was filmed, and was dead at 77.

Joe Biden would look like Mr Smithers but for hair plugs and caps. His teeth have been artificially whitened to the point of causing snow-blindness. There are no brain transplants to help Joe in his golden years’ decline. He’s a wreck. He’s walks like a Team America puppet and cannot get through a speech without stepping on his tongue.

In my opinion, Pelosi is even worse. If she didn’t have her hair dyed, and her face lifted bi-annually, she’d resemble a blue-hair screaming at the grandkids to get off her plastic lawn chairs. Her recent public appearances are sad and pathetic. Her primary language now is gibberish. Schumer is in a better mental state than Biden or Pelosi but still a goon. Fortunately, he’s constrained by President Manchin.

The combination of cognitive decline and control of two branches of government by three people with a combined age of 231 has left America in a precarious spot. Without term limits, this was inevitable. Pelosi could run as a dead person and win in San Francisco. You can tee-up your own joke.

Fifteen states have term limits, and it hasn’t helped rid us career politicians. Even in indigo-blue California, there are term limits; however professional politicians run California. Once they are termed out in one seat, they move on to another. Assembly members, once termed out, run for something else. It’s like trying to rid a building of cockroaches. They just move to another room — unless you step on them or fumigate.

The solution for Washington, D.C., is to create term limits that are actually limits on how many years one person can serve. Put an ultimate cap on time. Twenty years in Congress is plenty. It would allow representatives to run for 10 terms. Senators could get three terms.

A person can’t serve more than two terms as president. That’s already in place via the 22nd Amendment. If we had federal term limits we’d be rid of Pelosi, Schumer, and Biden.

Term limits, unfortunately, will likely never happen. Like the limits on the presidency, it would likely need an amendment. I’m not sure a statute would suffice, and there is little chance that the clowns running the federal government would “vote themselves out.” They are too used to sucking on the federal teat.

We need new blood. Five former SEALs are running for Congress. That number doesn’t include Dan Crenshaw, who’s already in Congress. There are several more men and women in Congress who served. Maybe men and women who have served and seen war will keep us out of endless wars and the neocons will be shown the door. Maybe in 10 or 20 years, we’ll have enough new blood in D.C., so that they will be willing to amend the Constitution.

Pelosi will vote against it. She’ll be a spry 101 and on her 58th facelift.