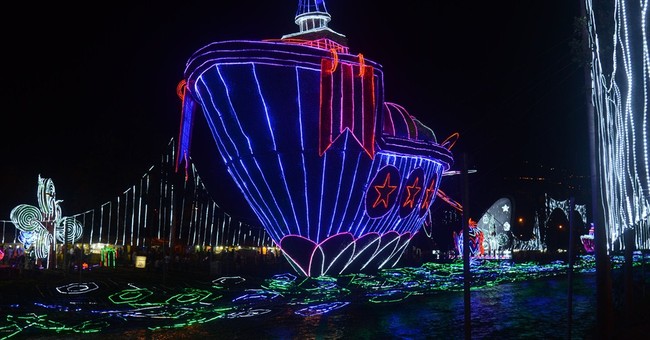 There are likely few worse feelings than winning and then being forced to lose.

That very fate recently found a boat owner in Virginia.

Captain Bill Berger entered his barge into a contest for best-decorated vessel, and he walked away with First Place.

The competition concerned a kind of Christmas decor — it was the annual yuletide Yorktown Lighted Boat Parade.

Bill recounted his triumph to WKTR:

“When we left, we were declared the winner.”

It sure must’ve felt fantastic.

Unfortunately, at some point, a change of heart was had — by the Yorktown Foundation’s board of directors.

Why was the rug so rudely pulled?

As it turned out, the Powers That Be determined Bill’s boat had featured an “overt political message.”

And that — purportedly — counted as a disqualifier.

“It was very well lit — it was a beautiful boat.”

“The guy did a great display,” he said. “The crowd was very responsive to it.”

So Bill had won over onlookers and the coveted championship.

Yet, his buoyed joy was sunk by second thoughts.

Dr. Walt suspects — as stated by the New York Post — “that judges did not know what the slogans meant and were swayed by huge cheers the vessel got at the show.”

On Saturday, December 4th, the boat bagged Best in Show.

However, according to CBS3, “by Tuesday, the Lighted Boat Parade was getting national attention for all the wrong reasons.”

Yet all Bill had done was offer support for a presumed underdog.

Bill lent a helping hand in the form of “Let’s go.”

But the board didn’t appreciate the boost.

“We absolutely apologize for this. We had no idea this was going to happen, and we regret it.”

“If it wasn’t just for this political issue, I think the guy would have had a very good chance. The crowd was very responsive to it, and I think it’s possible the judges may have responded to the crowd activity.”

Is it positively political to express encouragement?

Somehow, even Captain Bill himself saw the slogan as bearing a governmental bent, albeit a righteous one:

“We have a horrible president. Is it inappropriate? In today’s world, I don’t think so.”

The family-friendly event has been running for 25 years. Akers said this has never happened before, adding because the foundation is a 501(c)(3) nonprofit corporation, it can’t be involved in political speech.

“[B]y law, we’re not allowed to have any political view,” Walt explained.

On Tuesday night, the Foundation met to discuss ways of preventing such a thing from ever happening again.

Back to Bill, his boat also boasted the initials “FJB,” which I can only assume, in the holiday spirit, stood for “Frosty and Jingle Bells.”

“The members of the Yorktown Foundation,” he wrote, “wish to reiterate that our mission continues to be to unify our community through events and activities that showcase everything that is wonderful about Yorktown, York County and our citizens.”

“While we recognize that political divisiveness is a factor in our daily discourse, we DO NOT want it to negatively impact anyone’s enjoyment of our community events. We regret that this incident occurred, and we will work to avoid such events in the future.”

Here’s to next year’s contest being free from controversy.

And to Brandon, wherever you are: I hope you’re okay.

Robber Chokes Woman, Her Young Son Shoots Him in the Face