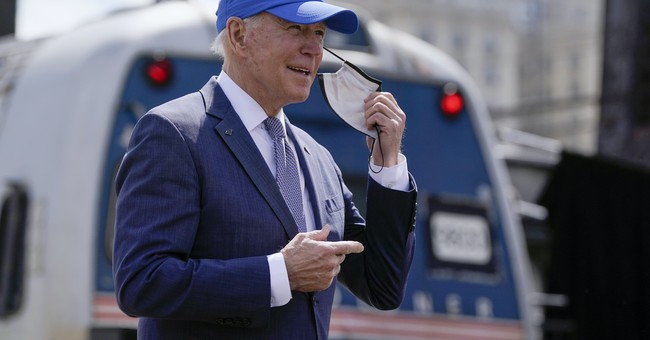 We all know that Joe Biden loves Amtrak. He talks about it as much as he can. He’s so obsessed with it, he even makes up imaginary stories about conversations with train conductors who are no longer alive. As we reported, he told his debunked Angelo Negri story for the sixth time this week, once again, changing the details a little bit but still not true.

But ironically, it turns out that Joe Biden’s policies are hurting that very corporation that he loves so much.

Amtrak President Stephen Gardener testified before the House Transportation Committee yesterday that they will have to make cuts to their long-distance services because of Joe Biden’s vaccine mandate on federal contractors. That mandate was scheduled to go into effect on Jan. 4 but has been blocked nationwide in the courts. But that hasn’t stopped some businesses from making changes to comply with it, including Amtrak.

Gardner said that 94 percent of their employees were fully vaccinated and 96 percent had received at least one jab, although those numbers didn’t include people who were on leave or had an approved accommodation. So it’s not clear exactly what the real number of the workforce is, unless you know those numbers.

“However, because many engineers, conductors and on-board service employees retired or left Amtrak during the pandemic, and we temporarily halted hiring due to funding uncertainty and covid-related distancing requirements that inhibited training, we anticipate that we will not initially have enough employees to operate all the trains we are currently operating when the federal mandate takes effect,” Gardner added.

“At some of these crew bases across our network, we have a relatively high percentage of unvaccinated employees. If those employees chose to not get vaccinated by the deadline, we will not have sufficient trained staff to support current service frequency on affected routes, as engineers and conductors must undergo extensive training both when hired or promoted and to become qualified on the characteristics of each route on which they work,” Gardner added.

Psaki then tried to downplay the reality of the very cuts that Gardner had spoken about, “But of course these requirements– we don’t expect these requirements will cause disruptions to services people depend on.”

Amtrak disagrees with you, Jen Psaki. Notice also that she simply ignores the ruling of the courts against their mandates, still trying to get corporations like Amtrak to comply. But this is a typical response from the Biden Administration — they are continually denying the reality of the harm that their policies cause from this to inflation, which they initially claimed was “transitory.”

Anything that might show how bad their policies are, they simply deny it exists. And they’ll keep doing it and pushing it, regardless of the constitutionality or the harmful effects that their actions might have.