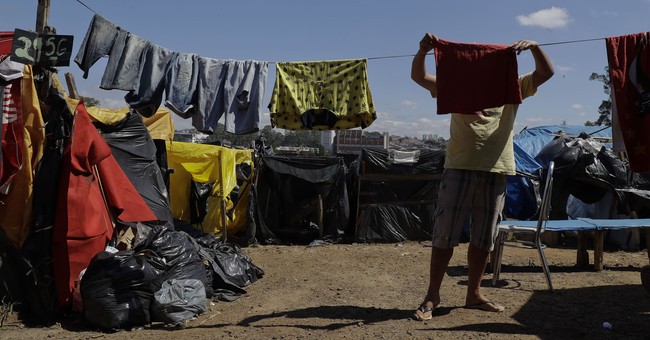 A couple of days ago, CNN, unironically, announced that the White House was meeting with major media trying to get better coverage of the US economy, which, at this moment, seems to teeter on the cusp of descending into hyperinflation and depression. This story is from Tater’s bewhiskered dweebish sidekick Oliver Darcy.

The White House, not happy with the news media’s coverage of the supply chain and economy, has been working behind the scenes trying to reshape coverage in its favor. Senior White House and admin officials — including NEC Deputy Directors David Kamin and Bharat Ramamurti, along with Ports Envoy John Porcari — have been briefing major newsrooms over the past week, a source tells me.

The officials have been discussing with newsrooms trends pertaining to job creation, economic growth, supply chains, and more. The basic argument that has been made: That the country’s economy is in much better shape than it was last year. I’m told the conversations have been productive, with anchors and reporters and producers getting to talk with the officials…

As my colleague, Bonchie pointed out in White House Colludes With News Outlets to Pee on Your Leg and Tell You It’s Raining, it isn’t very often that the White House will brag about having a “Come-to-Jesus” meeting with the media to help get their minds right.

If this is all copacetic, why do this “behind the scenes” instead of just holding open briefings so the public can be privy to these discussions? We know the answer to that: It’s not all copacetic. This is reminiscent of Hillary Clinton’s emails exposing that her campaign worked directly with journalists to feed them stories. That’s clearly, in my view, what’s happening here with the Biden White House, and it is highly unethical.

Laughably, Brian Stelter wrote a low-selling book in which he ranted and raved about how the Donald Trump administration was working with Fox News to shape coverage (and that appeared limited to the opinion shows like Hannity). But while Stelter found that way out of line, “newsrooms” getting private briefings from the Biden administration to change bad news coverage is just fine with him. Heck, not only is it fine with him, but it’s also preferable and productive. These people wouldn’t have standards at all if they didn’t have double standards.

Well, it looks like that strategy paid off. For a while this morning, “Biden Boom” was trending on Twitter. When encountering that phrase, your first thought is that Biden must have self-immolated while huffing his own farts because it surely could not apply to our economy. Follow the link, and you find this sad piece of propaganda.

The Washington Monthly has a story that could pass as something from the Babylon Bee titled It’s a Biden Boom–and No One Has Noticed Yet.

While many people are uncomfortable communicating bad news, Democrats have a problem these days talking about good news, especially on the economy. Based on the data, President Biden and the Democratic Congress are set to preside over the strongest two-year performance on growth, jobs, and income in decades–so long as the current cycle of inflation eases, and the Omicron variant does not trigger another round of shutdowns. The future paths of inflation and the pandemic are large and important unknowns–but if they break right, everything else points to a Biden boom through 2022.
…
Given this year’s remarkable gains in growth and employment, why is Biden’s approval on the economy so far underwater? It’s really not very mysterious: Americans’ perceptions of the economy always lag actual economic conditions when those conditions have recently changed. Everyone remembers how terrible the economy was less than one year ago, and many Americans are still unconvinced that the turnaround will last.

So, if the economy continues to improve as economists expect, people will come to believe again. In that case, the midterm elections could well unfold during a formidable Biden boom, which certainly would be good news for the Democrats.

There is a good reason why people haven’t noticed it; it doesn’t exist. The crap in this article and that produced by the White House would shame Walter Durant into giving his Pulitzer Prize back.

The claims are nonsense. The only way that story is not a collection of blatant and egregious lies is if you use the economic trough caused by the self-inflicted Wuhan virus panic as your baseline. Looking back over a 5-25-year horizon, there is no comparison between where we were and the floating dumpster fire presided over by Joe Biden and the incompetents he has surrounded himself with.

The employment rate is the lowest it has been since the mortgage meltdown. The increases in employment they are touting have yet to make up for the lockdown losses. LET’S GO BRANDON.

Labor force participation is at least a 25-year, if not an all-time low. The reductions in the unemployment rate hyped by the White House and its fluffers only exist because so many people have entirely dropped out of the workforce. LET’S GO BRANDON.

Inflation is also at a 25-year high and shows every sign of gaining strength rather than abating. The modest gain in real income, about 5%, has been utterly devoured by inflation. LET’S GO BRANDON.

About 70 percent of the population thinks the Unites States is on the wrong track. That is approaching an all-time record. LET’S GO BRANDON.

In summary, fewer people are working that that’s fine because fewer people are interested in working. Their wages buy less, which is just as well because the supply chain is totally screwed, and there isn’t much to buy. Inflation appears to be headed into Jimmy Carter country, and no one expects things to get better.

No, there is no Biden Boom. The US economy is resilient but not infinitely so, and it remains to be seen how much punishment it can take and manage to come back.