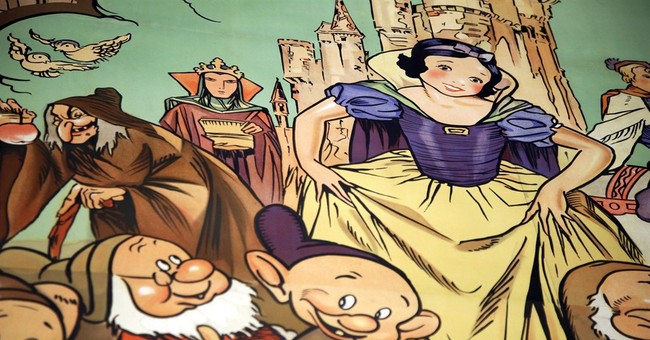 This news doesn’t come as a surprise, but that doesn’t make it any less ridiculous. Disneyland’s newly-revamped Snow White ride has come under heavy criticism from the “cancel culture” mob because of — I can’t. It’s too ridiculous. Let’s just say, for now, because Disney failed to rewrite the history of its iconic Snow White to appease the Looney Tunes left.

Again, no shock. When a cartoon French skunk is canceled because the Lunatic Left fears the perverted skunk has been subliminally programming generations of young boys to grow and become serial rapists – or worse. Anything is possible from these people; this is simply one more crazy-train example.

As reported by The New York Post, the newly-revamped “Snow White’s Enchanted Wish” ride reopened in Anaheim last Friday with much fanfare, after being closed for extensive renovation for over a year, to mostly glowing reviews.

Predictably or not, the “cancel culture” mob promptly took up its self-righteous torches in highly-offended protest. Not against Snow White, mind you — or even the ride, itself.

Prince Charming was “the problem.”

Why? Because Snow White’s prince to be, in one of the most famous kisses in Hollywood movie history, planted his smacker for the ages on Snow White’s waiting lips — making her enchanted wish come true — without her consent. Yes, this is how far we’ve fallen.

Why that misogynistic bastard! Who the hell does he think he is, Donald Trump?

As The Post reported, SFGate reviewers Katie Dowd and Julie Tremaine attacked the ride for including the “kiss he gives to her without her consent, while she’s asleep, which cannot possibly be true love if only one person knows it’s happening.”

In an op-ed last week titled “Disneyland’s new Snow White ride adds magic, but also a new problem,” the ladies — sorry, Katie and Julie; I assumed their genders — adopted the attitude of a mother scolding her misbehaving children.

“Haven’t we already agreed that consent in early Disney movies is a major issue? That teaching kids that kissing, when it hasn’t been established if both parties are willing to engage, is not OK?

“Why not re-imagine an ending in keeping with the spirit of the movie and Snow White’s place in the Disney canon, but that avoids this problem?”

OK, twin moms! We’re sorry! We didn’t mean to screw up. But, Snow White? We just thought–” “You just thought what?” — I imagine twin-moms Katie and Julie demanding to know, as they cut Disneyland off. “We’ll try to do better, twin moms. Really, we will.”

Disney’s 1937 “Snow White and the Seven Dwarfs” was its first animated feature. Here’s a bit of background leading up to the “problematic” scene.

Jealous of Snow White’s beauty, the wicked queen orders the murder of her innocent stepdaughter, but later discovers that Snow White is still alive and hiding in a cottage with seven friendly little miners.

Disguising herself as a hag, the queen brings a poisoned apple to Snow White, who falls into a death-like sleep that can be broken only by a kiss from the prince.

Operative words: “a death-like sleep that can only be broken by a kiss from the prince.”

This fact raises a question. Alison had the same question — and observation — I had.

“Did y’all think they would rewrite the freaking story???”

Yes, Alison, that’s exactly what they thought Disney would do.

Helen had thoughts, as well.

Prince Charming believed Snow White was dead. It is entirely normal for a loved one to kiss a deceased person goodbye, and never once have they been able to gain that persons consent….. you utter f*ckwits.

Tell ’em, Helen — tell those utter whatever you called them!

On second thought, Helen, if Prince Charming truly thought Snow White was dead, you better be careful. You know, that whole necrophilia thing. I mean, the cancel culture mob might come knocking on your door if you keep this stuff up.

I took the liberty to include a clip of the original famous kiss for all you other white male misogynists out there — along with the rest of the planet who happens to have fond memories of watching “Snow White and the Seven Dwarfs” with their children, their parents, or perhaps even their grandparents, generation after generation.

And the really amazing part?

I’m not aware of one child who was triggered, over all those years, by the “problematic” question of consent. But I have through the years seen oodles and oodles of smiling young kids — boys and girls alike — not only happy when Snow White awoke from her deep sleep, but also over that whole “happily ever after” thing, as well.

How unwoke we all were, America. How shameless of us.