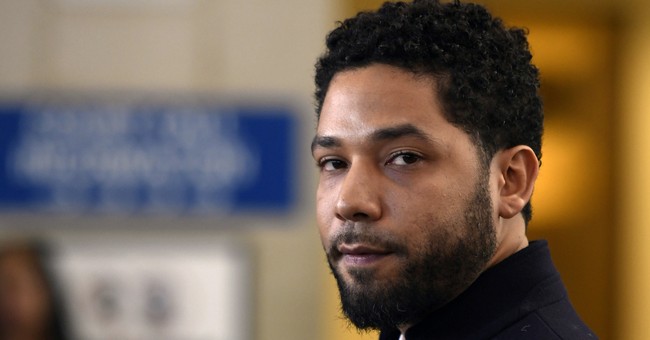 We’ve seen over and over again that facts and the truth don’t matter to Black Lives Matter — it isn’t even about black lives; it’s all about pushing their radical leftist position.

The group just proved that once again with a statement they’ve issued regarding the Jussie Smollett trial. The statement, from Dr. Melina Abdullah, Director of BLM Grassroots and Co-Founder of BLM Los Angeles, goes all-in defending Smollett, regardless of all the evidence that he made up the ‘hate crime’ against himself. Smollett is charged with six counts of felony disorderly conduct for lying to the police by filing a false report about the alleged attack.

Here they go down the rabbit hole, trying to convince us this, too, is somehow about racism.

In an abolitionist society, this trial would not be taking place, and our communities would not have to fight and suffer to prove our worth. Instead, we find ourselves, once again, being forced to put our lives and our value in the hands of judges and juries operating in a system that is designed to oppress us, while continuing to face a corrupt and violent police department, which has proven time and again to have no respect for our lives.

In our commitment to abolition, we can never believe police, especially the Chicago Police Department (CPD) over Jussie Smollett, a Black man who has been courageously present, visible, and vocal in the struggle for Black freedom.

So are they saying that in the abolitionist society they envision — where police are abolished — criminals aren’t prosecuted? Or is it that if they are politically on the right side that they shouldn’t be prosecuted? Because that’s surely what it sounds like to me. How dare the police oppress Smollett, and force him to lie about MAGA people and make up a hate crime! Those horrible police officers! Police are just automatically wrong, regardless of the reality.

Here’s a wild thought. Don’t make up false claims, and then maybe you wouldn’t be prosecuted for them?

I’m also curious as to what blind spot Black Lives Matter has for the Osundairo brothers? Or don’t their black lives matter? They’re the ones confessing that Smollett hired them for the hoax, it’s not just the police. Looks like Black Lives Matter is just throwing them under the bus and doesn’t give a rap what they are saying.

This is BLM in a nutshell — the lies here from Smollett don’t matter, the truth doesn’t matter; the only thing that matters is what serves their political goals. How to blow up any credibility they might have left.

But unfortunately for Black Lives Matter, things are not looking good for Jussie Smollett in the trial. I don’t know who told him to testify, but that was a disaster for him, for any jury that has a brain cell. In the process, he also managed to hang CNN’s Don Lemon out to dry as well, testifying that Lemon had tipped him off that the police didn’t believe his story. The jurors are going to be looking at reality, so the verdict is likely not to please Black Lives Matter.