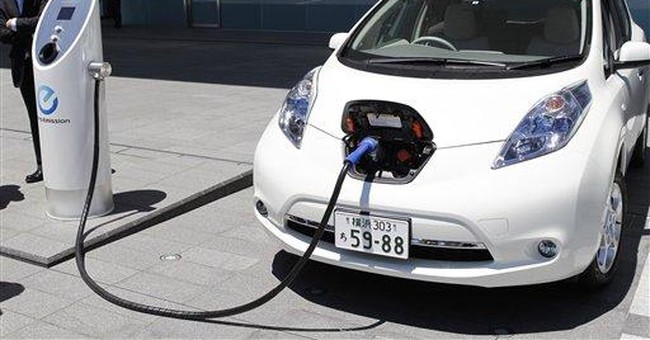 It was buried during the Thanksgiving weekend, but CNN managed to commit a random act of journalism, detailing some new climate data that was found to show that the Earth warming actually began many decades earlier than stated. This revelation manages to both throw off climate modeling, as well as make the claim that mankind’s technology was the root cause of…well, everything going wrong.

Joining in the fray now is NBC News, which has also surprised by delivering another inconvenient truth. A new report shows that the need for more raw nickel ore – driven by the explosive market for lithium batteries – is causing the eradication of pristine rainforests in the Philippines. This is not a gradual loss of acreage. Massive swaths of the forests are being shredded as nickel mines are expanding at a rate far greater than the rise in global temperatures.

This is rather dire news, because not only is this a problem being realized right now, but automakers and numerous other machinery and appliance makers are growing into the process of transitioning to battery operations. Then factor in President Biden’s desire to completely revamp our nation’s transportation methods, pushing for the far more expansive use of electric transportation, and this is a problem that will not only worsen but greatly expand.

Already this impact has been deep, and only becoming more alarming, according to NBC News’ report.

A nickel mine stretching nearly 4 square miles scars the forest above Bartolome’s farmland. The mine, Rio Tuba, plays a vital role in satisfying the global demand for a mineral more coveted than ever due in part to the explosion of the electric car industry.

Miles. This is an instantaneous impact on the ecosystem, something that appears to be far worse than the dire predictions we have been delivered to justify the phasing out of fossil fuels. Consider, all the promises of eradication of rainforests have always been cloaked in dire predictions – our grandchildren may not see the majesty of these environments if something is not done soon, go the platitudes.

Well, it sure sounds like the gradual die-off that they think was a possibility is now the vastly preferred option, considering what the hunger to power these globally friendly vehicles is doing at a rapacious rate.

With the demand for nickel skyrocketing, the Rio Tuba mine is now on the brink of expanding deeper into the rainforest, adding almost 10 square miles to its current footprint. Local environmentalists fear that it will wipe out the forest’s fragile ecosystem and increase toxic runoff into the rivers that flow past the farmland down below, jeopardizing the crops.

It is an amazing paradox, but it only adds to the growing list of claims and governmental reactions that have led to decisions that have had an adverse effect on the stated goal of saving the planet. So many examples spring to mind that you wonder how much longer the planet can survive the efforts made to save it from dying.

In my state of Florida, I am seeing more communities abandoning the practice of curbside recycling. This is because what has been said for a generation is beginning to come to light; recycling most products has a negative impact on greenhouse emissions. Starting with the vehicles, which need to pick up the items – nearly 200,000 nationwide burning fossil fuels daily. Then there is the dirty secret that recycling plants are notorious air polluters.

In addition, much of the plastic taken in is not recycled due to cross-contamination, or mixed media in the composition. There are numerous plastic derivatives and most are not compatible, so sorting and segregating are needed actions to assure proper usage. Glass, meanwhile, needs to be cleaned, and the colors have to be kept separate, all actions that take more energy than creating an entirely new product. Aluminum and steel are essentially the most logical base products to recycle.

Windfarms are another Utopian energy source that has failed to deliver us to the renewable promised land. Whether it is the evisceration of bird flocks or the susceptibility of the grid to adverse weather – as seen in Texas last winter – these sources have yet to match the energy needed to create, install, and maintain their operation.

Solar cells are another promised salvation that many fail to evaluate accurately. The energy used to create them has to be factored into their effectiveness, as they start with a “carbon debt”. Then you have the emissions from their processing, creating some gases more pernicious than CO2. Finally, you then have to deal with outmoded cells that need to be recycled, a process that involves some of those same impactful methods as in their creation.

Even the concept of electric vehicles saving the planet is, in practice, not rooted in logic. Sure, the cars individually can emit far less CO2, but what of the power plant needed to generate the electricity to charge things up? If it is not produced from a nuclear reactor, then your clean car simply offloads the emissions responsibility elsewhere, and the net result is not a positive one.

What this story of nickel production that ultimately strip-mines the very rainforests meant to be saved is a result of rushing headlong into alleged solutions that have yet to be properly vetted. The desire to transition away from fossil fuels is so strong that decisions are made to shut down that production before a viable alternative is found. It leads to unintended effects, such as destroying miles of rainforest at a rate not before seen, all done in the name of preserving the environment.