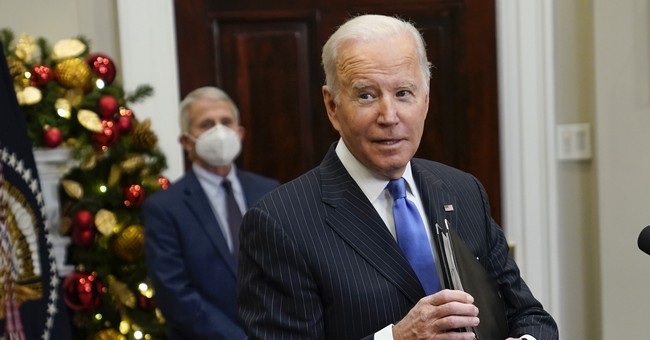 The Omicron variant of the COVID-19 has so far been a major disappointment to those seeking to continue their campaign to keep America terrified. Multiple reports have shown that this new mutation of the virus is not as deadly as the Delta variant. Another analysis conducted in South Africa further reveals how mild this particular variant is. But unfortunately, it has not stopped at least some Democratic politicians from exploiting the new development to enact more authoritarian measures.

The omicron variant of COVID-19 has shown signs of being less virulent than other strains, with early hospital data out of South Africa indicating that patients infected with the variant require less intensive care.

The analysis of 42 patients in the hospital’s COVID-19 ward found that only nine needed supplemental oxygen. Most of those patients were being treated for conditions other than COVID-19 but were found to be positive for the virus because of the hospital’s mandatory testing for new admissions. The average length of stay in the hospital over the past two weeks was about 2.8 days, far lower than the average 8.5 days for the past 18 months.

What is even more interesting about this variant is that even Dr. Anthony Fauci has not attempted to exploit it for fearmongering purposes. On Sunday, he said, “Thus far, the signals are a bit encouraging.”

The doctors who published the report indicated they needed more time to study the variant to definitively determine the deadliness of the new variant. Nevertheless, current reports have repeatedly shown that people do not have as much to fear from Omicron as the other variants.

Though omicron itself may be less virulent than the highly transmissible delta strain, it appears to be highly transmissible due to the dozens of mutations on the virus’s spike protein, which latch on to healthy cells to cause infection. The strain has been detected in at least 40 countries and 17 U.S. states since it was first found in California a week ago. A more complete picture of the strain’s virulence will not become available for another couple of weeks due to the lag between detection of infection and hospitalization.

However, despite the encouraging reports on the variant, the Biden administration still used it to impose travel restrictions from eight African countries that have experienced an Omicron outbreak. The White House is also urging more Americans to take the booster shot.

SFGate reported that the White House is also “revising its rules for in-flight mask wearing and for international pre-flight testing deadlines.” The emergence of the new variant has also prompted calls for a vaccination requirement for domestic air travel.

Despite the apparent mildness of the Omicron variant, leftists are still attempting to terrify the public into embracing more restrictions and vaccine mandates. On a recent episode of “The View,” one of the hosts blamed the spread of the variant on those who are unvaccinated:

RedState’s Bonchie also noted that left-wing media activists are trying to blame Omicron on – you guessed it – former President Donald Trump. He cited a report from Newsbusters which explained:

Decisions by top officials responding to President Donald Trump’s edict to protect “America first” contributed to a global delay in Covid-19 vaccine donations and a lack of effort to assist low- and middle-income countries, according to five current and former U.S. officials who worked under Trump on the federal pandemic response.

The failure to view the Covid threat in global terms left some nations — including those where the Omicron variant emerged in recent weeks — lacking inoculation and much more vulnerable to mutations, the officials said.

New York City Mayor Bill de Blasio took advantage of the manufactured hype over the variant to institute a vax mandate for workers in the private sector. On Twitter, he announced:

With Omicron here and winter coming, NYC is implementing a first-in-the-nation vaccine mandate for private sector employers and proof of vaccination for kids 5-11 at indoor dining and entertainment.

Wear a mask, get tested, get vaccinated and get your booster. We can’t go back.

According to a Fox News report, the fear peddlers are at least somewhat effective. One New Yorker told the news outlet that she approved of the new measure. “I’m not a fan of the mayor, but at this point in time, I really don’t care who makes these sweeping mandates,” she said. “Make them. Do it.”

Another told Fox, “At this point…if you’re not vaccinated, what are you doing?”

However, at least one New York City resident pushed back, saying “[i]t’s going to be a disaster,” and that “[p]eople have to have a choice.”

“I think that he has his own agenda right now,” she continued. “We know that there’s a new mayor coming in, so why is he doing it now?…because he wants to run for president?”

Despite the fact that Omicron isn’t as pernicious as other variants, the Democrats are still dead set on exploiting it to further their agenda. The question is: How much further will they be able to go before the backlash becomes more severe?