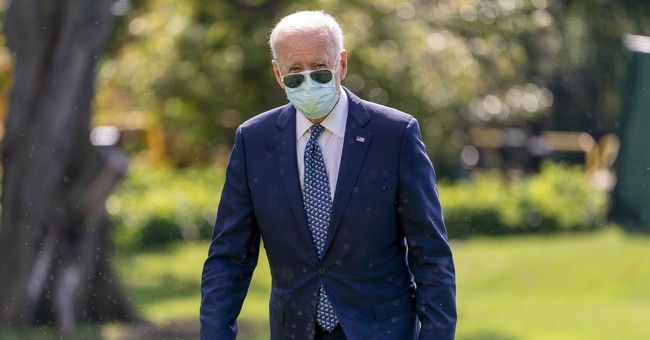 The Biden administration continues to struggle with narrative and reality as the pandemic they promised to “shut down” rages on. Well, it’s been raging on for the legacy media and their progressive followers. For the rest of us, it’s been winding down for quite some time now, although the political class still clearly hasn’t received the message.

Mr. Biden promised that when he took office he would do what President Trump couldn’t do…he would defeat the virus. It’s been nothing but a tragic comedy of errors since the first day of his tenure. Despite a slate of unconstitutional executive orders, mask and vaccine mandates for federal employees, coercion, shame, and a concerted effort to put as much pressure as possible on businesses to impose mandates, the virus is stubbornly refusing to disappear.

But there is one trick Biden has not yet employed in order to end this pandemic on the shores of America once and for all. Frankly, I’m surprised it wasn’t tried on day one.

Joe Biden could end the pandemic in an instant by…

It sounds so simple because it is.

The legacy media owns the lion’s share of the bully pulpit these days, and whether or not they truly believe every tidbit coming out of the White House, they are committed to reporting it as the gospel truth. And left-wingers in this country will buy anything coming out of a Democrat’s mouth.

Look at how easily Joe Biden lies when he’s in front of a microphone, without question from the media (with the delightful exception of professional thorn-in-the-side, Peter Doocy). He lied about a small kitchen fire, describing it as a fire that nearly burned their home to the ground with his wife still inside it.

He lied about being close friends with an inspirational Amtrak employee, who actually died a year before Biden claims to have even met him. He lied about being arrested for protesting apartheid in South Africa. He lied about being a passenger on a helicopter that was shot down in Afghanistan (why to Democrat personalities always choose this particular lie?). He’s lied about his academic record, his congressional record, and even said he marched during the Civil Rights era.

With just one or two exceptions, the legacy media has exhibited no curiosity or interest in these laughable and provably false claims. The ones who did report on his lies very politely named them “factually challenged” stories.

Whatever Joe says goes when it comes to the media. He can say the price of gas has dropped significantly, and the media and progressive bubble-dwellers cheer. He can say COVID is still a frightening threat, and they all cower and call for the suspension of civil rights. He can say there’s not a crisis at the border, and they nod their heads. He can say he’s the reason we developed our COVID vaccines so quickly and they report it as gospel. He can say that states like Florida and Texas are prolonging the pandemic, even as they report massive successes in treatments, transmission rates and plummeting hospitalizations.

It doesn’t matter. The legacy media reports the narrative, not the truth. And their customers consume it all ravenously and without question.

Remember the “Afghanistan death count” chyron on CNN? During the Bush years, it was a regular fixture. Before the left thought Bush was just a sweet old friend of the Obamas who likes to paint pictures, they thought he was Literally Hitler(TM). The death count was meant to remind us of what a cruel and callous monster he was. It disappeared when Obama took office, and so did any care of what was going on in Afghanistan. When Afghanistan became Obama’s war, it disappeared off the front pages on a daily basis and left-wing Americans forgot to be outraged about it.

What would happen if tomorrow the media stopped reporting on COVID case counts and hysterically profiling variants that don’t seem to be unmanageable? What if tomorrow, the media decided to treat COVID in America the way they treated the swine flu epidemic in 2009?

I’ll tell you what would happen, if you haven’t already guessed.

COVID panic would disappear. Like in 2009, everyone would know someone who contracted it, people would tell their stories, wash their hands, stay home if vulnerable, and move on with their lives. The COVID pandemic is no longer a health pandemic. It is a pandemic of media malpractice.

Given the lockstep nature of the progressive left, it would take but a word from Biden and the pandemic — much like the Afghanistan death count — would drop from the lead story on the usual suspect networks. He could take credit for the great successes of Florida and Texas, just like he took credit for the vaccine. He could tout how his mandates and executive orders really did the job. He could talk about all the lives he saved with his swift action. He could spend the next three years campaigning on his administration’s roaring success in ending the pandemic in America.

It wouldn’t matter if it’s true (and of course, it’s not). They would believe him anyway. We all know the legacy media has no problem pivoting on a dime. The same people who said they’d never take a vaccine touted by the Trump administration are now the same people screaming bloody murder at people who hold the same position they did mere months ago. So we needn’t worry about intellectual honesty getting in the way.

It’s really a simple fix for the Democrats and it is perplexing that they haven’t already tried this.

The pandemic is over when Joe Biden says it is. There is nary an honest person in left-wing media who will say otherwise.