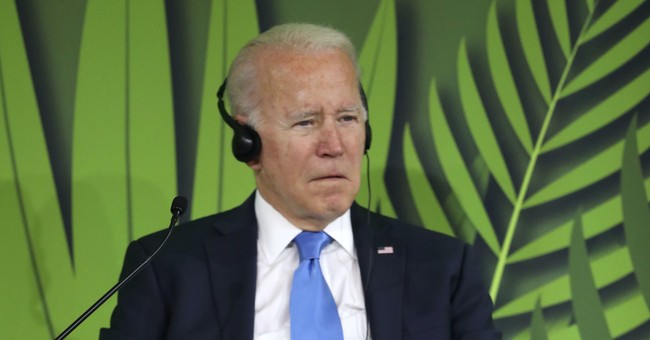 Today’s jobs report was nothing to write home about, with only 210,000 people being added to various payrolls. That represented a miss of well over 50 percent, as prior projections put the number at over 550,000.

The Biden administration did find something to latch onto despite the disappointing news, touting the 4.2 percent unemployment rate that came with the monthly report as a victory. Of course, there’s a lot of context missing in that claim, which we’ll get to in a moment.

Yet, it was Joe Biden’s remarks on this that raised the most eyebrows today. You expect the White House to spin bad news. But you don’t necessarily expect a visibly ill Biden to appear, blaming his grandson for kissing him and making wildly misleading claims about the economy. Why not keep this guy in bed?

Yeah, that’s kind of weird. He’s putting his grandson on blast for the fact that he has a cold? Who does that? And you’ll have to forgive me for not buying that story at all. If one of his grandsons was obviously sick, there’s no way Biden’s handlers would have let him interact with him. So what’s actually going on with the president? Given the lack of transparency from the White House and the lack of interest from the media, we’ll almost certainly never find out.

Still, why trot him out there in this state? Just say he’s sick and reschedule. I think the reason they didn’t do that is that they know what it looks like when Biden suddenly disappears for days on end. This is a man who has rescheduled numerous events at the last minute — with no real explanation — throughout this term. In response, many of us suspect he’s dealing with cognitive decline, but a man of his age is also susceptible to all kinds of other physical illnesses. That is one reason why putting a nearly 80-year-old man in the White House is a really bad idea.

But he’s going to run for re-election in 2024? Color me extremely skeptical.

Biden did manage to deliver a few statements, while otherwise looking like he was about to become incapacitated at the podium. Naturally, the gaslighting that his handlers prepared for him was so bad as to be insulting. On gas prices, Biden claimed to have lowered them “significantly.”

In reality, gas prices are literally down only two cents over the last month and still remain over a dollar higher than when he took office. I guess the president saw that ridiculous chart yesterday from the DCCC that asked people to thank Biden for the supposed reduction and decided to just roll with it?

Lastly, I’ll note that Biden also touted the unemployment rate falling to 4.2%. Yet, when the jobs report is weak but the UE rate still falls, there’s only one possible explanation for that. Namely, that the number of people outside the jobs market remains high. Massaged numbers that completely miss the full context are not something to be bragging about, but I guess this administration needs “wins” wherever they can get them.

The current mix of high inflation, mediocre growth (remember, context is key), and an inconsistent jobs market is a big problem, and that problem is not going away with wishful thinking and not-so-slick propaganda. The fact that we have a sickly, senile old man in charge of things only exacerbates the problem.