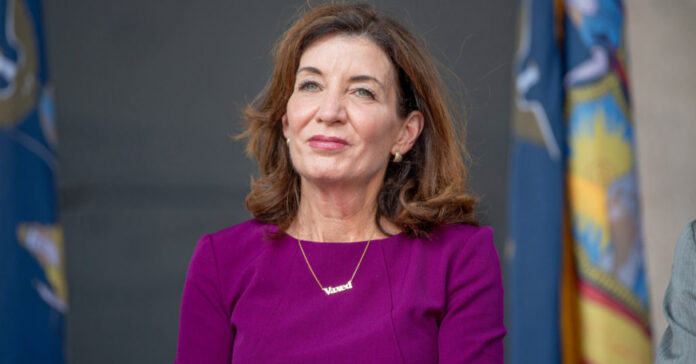 Kathy Hochul, New York’s newest governor, has decided that she liked the uber-liberal way that Andrew Cuomo ran the state. So, she’s decided that lockdowns, hoarding supplies, and more sound like a great idea. There’s just one problem: she can’t do any of that unless she declares a state of emergency.

Ahh, well, there’s the Omicron variant out of South Africa that is starting to worry the medical community. That should do, right?

Rather than focus on real issues, Hochul has decided to grab onto the ones that haven’t even hit the States yet. Omicron is not in New York, yet Hochul has said, “It’s coming.” That seems to be a bit preemptive, don’t you think?

Yet, she’ll get away with it because she’s a liberal. The Biden administration is just as liberal as Hochul, so they’ll not only allow her to declare the state of emergency, but they’ll also provide the necessary funding. And all of that is despite the fact that there is no actual emergency. It’s perceived and that’s good enough for them.

How dare Governor Abbott of Texas declare a state of emergency. What emergency? Oh, those illegal immigrants crossing the border, riddled with COVID and ready to commit crimes? The liberals invited them, so there really is no state of emergency.

Now, Omicron is coming to New York, so Hochul is doing exactly what she needs to do. Or, at least that’s how the liberals see it. They’ll put her on a pedestal and applaud all of her efforts. Maybe she’ll even get a book deal about how she was able to manage the new strain of COVID. After all, if Cuomo can get a book deal about his leadership efforts, Hochul should be able to do so, too, right?

With the move that Hochul has made with her state of emergency declaration, she also allows the state’s Health Department to put a pause on elective care and non-emergency surgeries at hospitals. It frees up beds for the sick. Only…there are no sick people and there are plenty of beds already free.

Hochul has also established an emergency order that requires nursing homes to have booster shots available to all residents. Clearly, though, she doesn’t find this to be particularly important since it won’t go into effect for a full week after she wrote the order.

Perhaps the most interesting part about Hochul’s declaration is that she wants it all to stay in effect until “at least January 15.” Does she think that the Omicron variant will come and go by that time? Do we have the country’s first psychic governor in office? Surely that’s something that would have come out by now if we did…

This whole thing is ridiculous. Hochul declares a state of emergency simply to engage in fear-mongering. Meanwhile, real states of emergency, such as the one in Texas, are ignored by the Biden administration. Ahh, hypocrisy at its best…