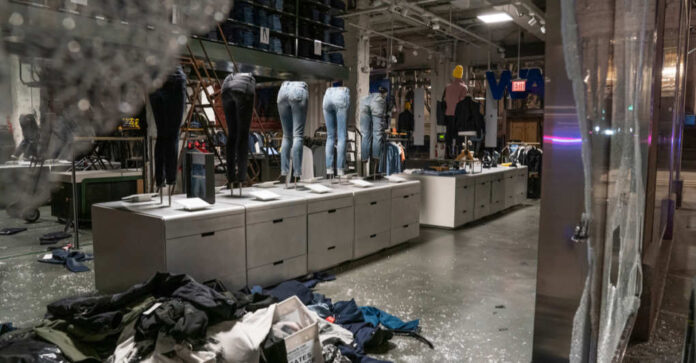 The Democratic Party has crippled law enforcement in the state of Minnesota. Their sadistic attempts to defund the police and not support the officers when they show up on a scene have led to people invading stores and taking whatever they want without fear of being confronted by the police. Shop owners and workers are scared to open their doors because the massive mobs will show up and take whatever they want.

Best Buy was the favorite target of choice in Minnesota over the weekend. And they were not the only ones to suffer at the hands of criminals seeking to take things that they did not pay for—shop owners in San Francisco, CA, and other major cities around that nation.

Minnesota and California are just two regions that the satanic liberals control. They believe that they are doing people a favor by keeping the police from doing their jobs. But the truth is that they are only hurting their chances of remaining in office.

Flash mobs have been showing up in the parking lots, smashing their way into the stores, and taking anything they can get their hands on. Black Friday took on an entirely new meaning when dozens of thieves took to the streets and filled their carts to the brim with the merchandise they had no intention of paying for.

The Daily Wire reported that CBS Minnesota said that “The Burnsville Police Department says that a group of 20 to 30 people entered a Best Buy location near Burnsville Center shortly after 8 p.m., stole electronics and fled before police arrived. No one in the group displayed a weapon and no injuries were reported. So far, no arrests have been made, and it’s unclear how much merchandise was stolen from the store.”

These greedy groups of liberals are bold enough to show up unarmed and take whatever they want. The Democrats controlling these areas have made it legal for robbers to take items up to a certain dollar amount without worrying about being arrested. It is their way of defunding the police and reducing police violence.

All the Democrats have done is empower the criminals to want to harm others in broad daylight. The news report also stated that “Maplewood police say that 10 to 12 adults and children stole “multiple high-value items” at a Best Buy near Maplewood Mall around 8:10 p.m. They were gone by the time police arrived on scene. Maplewood officials say that televisions, tablets, and hoverboards were stolen, and are working to assess whether the group is connected to other thefts in the metro.”

The thieves come in as fast as they can and get out before any police have the chance to show up. They have learned that there are not enough officers to cover specific areas well enough to mount a quick response. The people have enough time to take what they want and then exit without worrying about being pursued.

The liberal leaders want workers to quit their jobs to force a staffing issue. The Democrats need the flash mobs harming people and fear to set in on people seeking to earn an honest day’s wage. The kinds of attacks in Democratic-controlled areas mirror images of socialist-controlled countries with gangs moving from place to place, taking what they want.

Corie Barry is the chief executive for Best Buy. She noted that “When we talk about why there are so many people looking for other jobs or switching careers, this of course would be something that would play into my concerns for our people because, again, priority one is just human safety. And it’s hard to deal with this potentially multiple times in one location.”

It will not take the thugs long to figure out which areas they hit better than others. The Democrats will soon have blood on their hands when these thieves decide to start attacking the people instead of taking the merchandise on the shelves. Local stores are hiring private security, but that is only effective in some instances. The only way to protect the people is to kick the Democrats out and vote for Republicans that love the people and want to protect them.