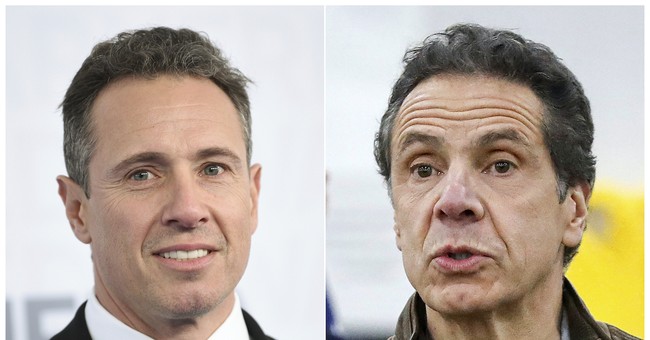 When last we left you in the grimy saga of the Cuomo brothers, Chris Cuomo had just been “indefinitely suspended” by CNN after new information came out showing he was much more involved with the defense of his brother former Governor Andrew Cuomo’s sexual harassment allegations than previously admitted. The information – which included texts discovered by the New York Attorney General’s office -showed that Chris Cuomo was even trying to dig up information on his brother’s accusers.

But now there’s more information and it’s not going to go well for the brothers.

According to New’s Cycle Media’s Jon Nicosia, Chris Cuomo will not be the last to be suspended at CNN. Nicosia’s source is saying that Cuomo’s staff (producers, etc) are being investigated by CNN concerning their help with smearing Andrew Cuomo’s accusers.

So it looks like it’s not just Chris involved. If this is true, Cuomo put CNN in even more trouble by dragging in his staff. No wonder CNN suddenly moved to suspend Cuomo. One has to wonder how bad it is and what Chris may have been having the staff or others at CNN do in regard to the accusers or in defense of his brother.

It remains to be seen if CNN will address this honestly since they haven’t addressed the situation honestly in the past. They allowed the conflict when they allowed Chris to interview Andrew on his show, promoting the former governor into a ‘pandemic hero.’ But CNN may be forced to be honest if the NY AG investigation goes into the actions of the staff if this is true. Because then it will all come out ultimately.

It also may not be just the NY AG that may be exposing more because Andrew Cuomo is reportedly now under investigation by the feds over the sexual harassment allegations as well.

The New York Post has uncovered information about a federal probe after receiving documents concerning a contract subject to a FOIA request that indicated the “DOJ has also undertaken an inquiry related to sexual harassment claims made against the then Governor.”

The contract made public on Thursday covers up to $2.5 million in payments to the white-shoe law firm of Willkie Farr & Gallagher for legal services to Gov. Kathy Hochul’s office in connection with the DOJ probes, James’ investigation and the recently concluded impeachment investigation by the state Assembly’s Judiciary Committee.

The DOJ inquiry is focused on possible violations of federal civil rights and labor laws. The investigation is being conducted by the Civil Division of the Brooklyn US Attorney’s Office.