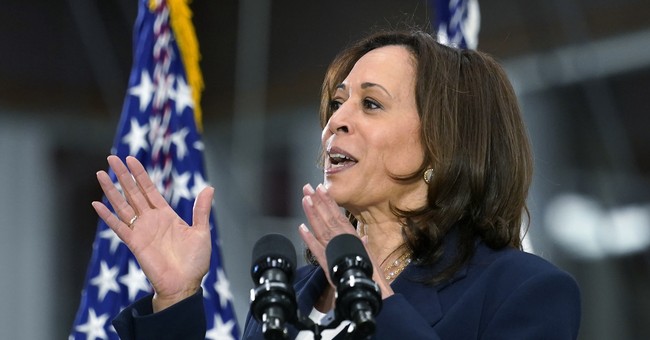 Vice President Kamala Harris’s first year in office has been plagued with one wave of bad press after another, a pretty astonishing factoid when you consider how some in the mainstream media were already paving the way for her ascension to the Oval Office well before she was sworn in as Joe Biden’s second in command.

The reasons for it all mostly lay at the feet of the woman at the center of it all: Harris herself.

Even CNN has gotten in on the action, reporting on how Biden staffers were growing increasingly frustrated with Harris. There have also been reports of a rift between President Biden and Harris, which is said to be growing. On top of that has been the resignation of her comms director Ashley Etienne last month, as well Biden himself appearing to snub Harris at a D.C. soup kitchen last week as they helped with food prep in advance of the Thanksgiving holiday.

And now, with rumors swirling about the possibility of Biden replacing Harris on the 2024 ticket should he decide to run again, and even talk of a possible SCOTUS nomination on down the line if she was to be booted from the ticket, we are learning of another high-profile resignation from her team:

Symone Sanders, the senior adviser and chief spokesperson for Vice President Kamala Harris, is expected to leave the White House at the end of the year, according to five administration officials familiar with the matter.

An official in the vice president’s office confirmed the departure and said the president and vice president have “known for a while.” The official added that Sanders had worked for President Joe Biden for nearly three years.

In a note to staff Wednesday night, Sanders confirmed the exit, writing, “I’m so grateful to the VP for her vote of confidence from the very beginning and the opportunity to see what can be unburdened by what has been. I’m grateful for [Harris chief of staff] Tina [Flournoy] and her leadership and her confidence as well. Every day, I arrived to the White House complex knowing our work made a tangible difference for Americans. I am immensely grateful and will miss working for her and with all of you.”

Though Sanders seemed to suggest in her note that she was leaving on good terms, like Etienne’s resignation last month the timing is incredibly intriguing (and convenient) considering Harris’s cratering poll numbers and the numerous reports of infighting in the VP’s office and prior reports from former staffers on how hard Harris allegedly was to work for. Turnover during her failed 2020 presidential campaign reportedly was also very high.

Back in August as her woes hit fever pitch, Harris brought in crisis communications expert Lorraine Voles, who per Politico once served “as a strategist and adviser to Hillary Clinton’s 2006 Senate reelection race and 2008 presidential bid.” A month later, it was clear that not even that was going well.

Obviously, things have not improved one bit since then, seeming to hit a low point when Harris was seen at a New Jersey bakery a few weeks ago sampling sweet treats alongside Sen. Cory Booker (D-N.J.) at the same time DHS Sec. Mayorkas and other senior members of the administration were holding critical high-level talks with Mexico’s president about the border crisis, of which Harris was made the point person by Biden back in March.

Considering how things are going so far, it’s highly likely these two resignations from VP Harris’ team won’t be the last in the coming weeks. If things don’t pick up and morale doesn’t improve, expect more to head for the exits sooner rather than later because let’s face it, no one wants to be on a train that has skipped wildly off the tracks, especially when that train is in the form of the Harris Express.