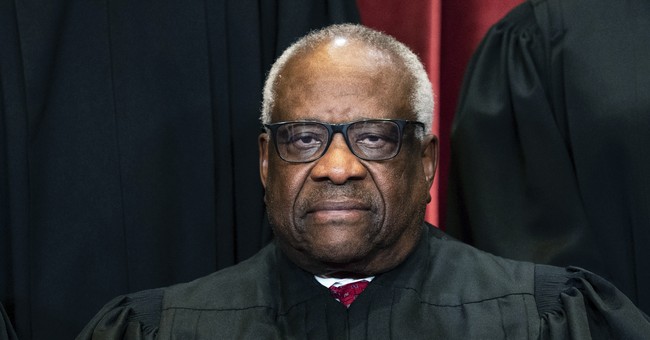 Supreme Court Justice Clarence Thomas was sworn in on October 23, 1991. Beginning in 1996, he would take a 10-year break from asking questions from the bench, until the first case before the Court following the death of Chief Justice Antonin Scalia, his ideological soul mate.

While still measured, Thomas has been known to take lawyers to the mat when he sees fit to do so. Wednesday morning’s oral arguments in the Mississippi abortion case — that threatens to weaken Roe v. Wade if not overturn it — provided Justice Thomas the perfect opportunity to do just that, with a round of tough questions for the “pro-choice” lawyers.

Justice Thomas: Does a mother have a right to ingest drugs and harm a previable baby? Can the state bring child neglect charges against the mother?

Pro-abortion attorney Rikelman: That’s not what this case is about, but a woman has a right to make choices about her body.

Jack Posobiec, the senior editor at Human Events, weighed in on Thomas’s performance, as well.

Thomas is reeling them in now

Abortion Beckys are flailing about

They know there is no textual basis for Roe v Wade

As Election Wizard saw it, there were two “incredible moments” during today’s oral arguments.

Two incredible moments today from oral arguments at the Supreme Court on abortion.

1) Justice Thomas’ brilliant questioning about child neglect that tripped up the pro-abortion lawyers.

2) Justice Sotomayor’s bizarre remark that evidence of fetal pain is not proof of life.

How hypocritically left-wing of Sotomayor.

So here we are. As reported by The Washington Post Wednesday afternoon, “the [f]ate of Roe v. Wade is in the hands of” the Court following a “spirited day of debate.”

The Court, suggested The Post, “signaled that it is on the verge of a major shift in its abortion jurisprudence after hearing nearly two hours of arguments from attorneys for Mississippi, an abortion provider from the state, and the Biden administration.”

Ya know, you gotta hand it to the Democrats.

Despite controlling both chambers of Congress, the White House, and the “mainstream” media, things aren’t exactly going all that swimmingly on their side of the tracks. Crisis after self-inflicted crisis, several federal courts effectively blocking Biden’s unconstitutional vaccine mandates across the country, and now a strong possibility that the liberal abortion mantra Roe v. Wade might very well get its wings clipped or “worse,” I’m honestly hard-pressed to come up with a single major area where things are on the right track for the left.

So, let’s go, Brandon! Keep up the good work!