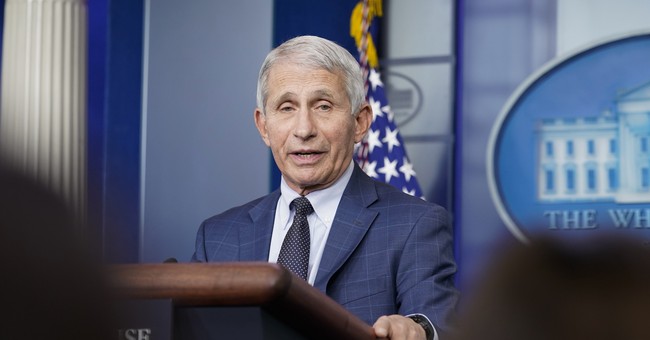 Dr. Anthony Fauci, unable to leave the spotlight for even a second, held a presser today. But what made it unique was that he tag-teamed the event with White House propagandist Jen Psaki. What followed was an insulting disaster, complete with Trump-bleach references, an inability to explain their own policy decisions, and the good doctor tying himself in knots when called on his partisan hypocrisy.

At one point, Psaki was asked about Biden’s now-infamous promise to “shut down” the coronavirus. Apparently, the administration just needs more time.

That’s not at all how Biden sold his pledge when he used it against Donald Trump during the 2020 election. Rather, he continually insinuated that he had a plan to quickly end the pandemic. Well, two major variants later, the virus is still spreading with no end in sight. Had Biden been honest about expectations from the start, that would be understandable, but he wasn’t, and he gained support by promising the impossible. Now, he and his handlers are mad that people are holding them to the standard they set. Yeah, tough luck.

At another point, Psaki repeated the lie that Donald Trump had encouraged people to drink bleach as a way to combat COVID-19. Of course, that’s not actually what Trump said, but expecting honesty out of this White House is like expecting my young son to keep his room clean. Besides, what does the former president have to do with their current failures?

Of course, it was Fauci who truly stole the show. When asked about the new travel restrictions put in place, the good doctor couldn’t even explain them.

Fauci was asked why he banned travel from Mozambique, despite the fact that they have had zero Omicron cases, and he has no explanation at all. Instead, he responds by saying it’s a “good question.” But shouldn’t Fauci have the…answer to that question?

After all, it was Joe Biden who claimed that Fauci and his team were behind the new policy to ban travel from various African nations (see Joe Biden’s Answer on the New ‘Africa Ban’ Should Bring Comfort to No One). So to recap, Fauci can’t explain the logic behind the ban…he came up with?

Things just devolved from there. At another point, Fox News’ Peter Doocy asked Fauci an obvious question: Why is Fauci not vehemently demanding the same testing regime at the Southern border that he’s demanding for American citizens?

Again, he had no good answer, snarking back at Doocy that it’s a “different issue.”

Except it’s not a different issue at all. If we are requiring those flying into the country to be tested, why are we not requiring those who cross the Southern border, much less those who have no right to do so in the first place? You’ve probably noticed by now, but while Fauci claims to be a non-political public servant who is just in his position to “save lives,” he always manages to toe the line for the Biden administration. Just a coincidence, I’m sure.

These people want to act like they are the adults in the room, but all they end up doing is insulting everyone’s intelligence. Bringing up a lie about bleach to obfuscate from their own failures? Being unable to explain a policy they just put in place? This is amateur hour stuff, and it’s kind of scary that Fauci has managed to stay in his position this long. Seriously, never has a better example of government mediocrity existed. Meanwhile, Jen Psaki is just Jen Psaki. You expect her to lie to you and lecture you while doing it. Water is also wet.