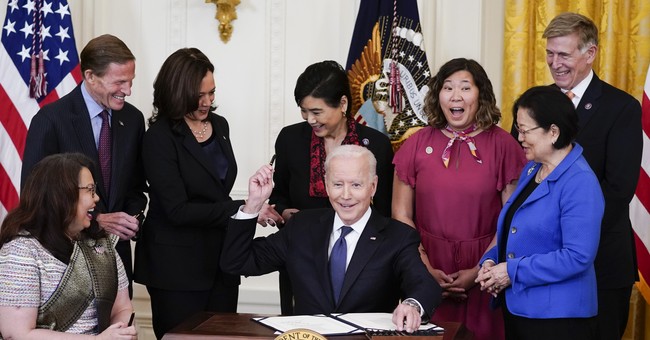 We reported earlier about the problems at Joe Biden’s bill signing earlier today.

As we noted, he started the event 40 minutes late. Then he kept taking off his mask when he was speaking around people. This was despite him demanding yesterday that everyone wear masks to help fight the Omicron variant, saying if everyone wore masks and got vaccinated, he wouldn’t have to talk about lockdowns.

Maybe he needs to have a conversation with himself? Not only did he keep taking the mask down when he wanted to speak to people, but he also kept adjusting it and touching his face. So forget about any kind of infection protocol, he kept violating the first principle — stop touching the mask and stop touching your face!

The bills were all related to veterans. They included the Protecting Moms Who Served Act of 2021, Hire Veteran Health Heroes Act of 2021, Colonel John M. McHugh Tuition Fairness for Survivors Act of 2021, and a bill Requiring the GAO to Report on the Disparities of Race and Ethnicity in Administration of VA Benefits.

Biden had trouble reading the names of the bills and at some point just gave up and said he’d sign one without reading it.

He also made one whopper of a slip of the tongue when it came to Kamala Harris.

But there was another incident that I didn’t want to leave out because it was emblematic of their new policy to use music to shut down questions of Biden and cover up anything he might be saying so you can’t pick up the gaffes. We saw this for the first time about a week ago.

After the signing, Biden started going off-script when he was introduced to someone by Sen. Tammy Duckworth (D-IL). He started joking about doing what Duckworth told him to do. Again he kept taking down the mask and touching his face. At this point, the way he deals with masking is a joke.

According to Townhall, the White House tech team cut Biden’s microphone and blasted music over the Livestream. You can see Biden continue to talk but you can no longer hear him.

“The music – ‘God Bless America,’ an instrumental version – came up as he finished, cutting off the president’s exchange with an 11-year-old audience member,” the White House pool report states. “The president remained on the stage, posing for photos with his guests.”

A conversation with an 11-year-old? Do we even want to know what that was about? I’m afraid to find that out, given Joe Biden. So far, this is the only description I’ve seen of it.

But this is where they are at now — playing music over the alleged occupant of the White House because they can’t risk yet another gaffe. Can we say again what a bad position that puts the country in?