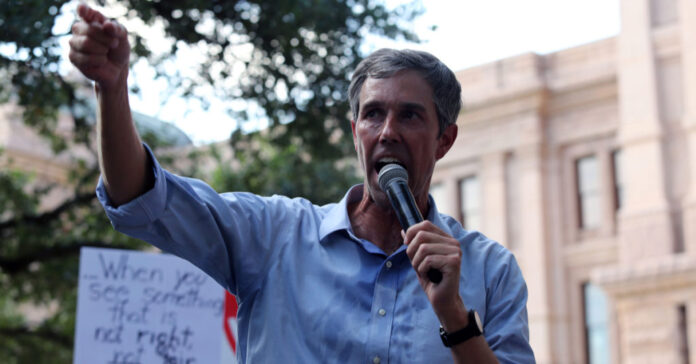 It’s hard to believe that Beto O’Rourke has a chance of winning the governor’s office in Texas. The Texas Democrat, Robert Francis O’Rourke, better known as “Beto,” has declared that he will run on a platform that includes gun confiscation if he is elected to be the state’s next governor. He also has not declared whether or not he even wants President Joe Biden to campaign for him in the state.

Dana Bash, a CNN host, interviewed O’Rourke and referenced his failed presidential campaign. She said that gun control, in particular, was his number one issue in that campaign.

Dana Bash played a clip from one of his presidential debates. Beto O’Rourke said with gusto, “Hell, yes, we’re going to take your AR-15, your AK-47.” She then asked him if he was still planning to do that as governor of Texas.

“Look, we are a state that has a long, proud tradition of responsible gun ownership. And most of us here in Texas do want — do not want to see our friends, our family members, our neighbors shot up with these weapons of war,” O’Rourke said. “So, yes, I still hold this view.”

The candidate for governor said that he did not want extremism in the gun laws of Texas. He said that he wanted to protect the Second Amendment. He wants to protect the lives of our fellow Texans. And he knows that when “we come together and stop this divisive extremism that we see from Greg Abbott right now, we’re going to be able to do that.”

It was later in the interview where Bash asked Beto if he would want the president to campaign for him in the state of Texas. She referenced Biden’s low approval rating and said that a recent poll had shown that the president had just 35 percent of Texans who approve of his performance.

Bash pressed Beto some more asking him if that meant that he would prefer that Biden not come based on what he had just said. And Beto said that it simply meant he was focused on Texas and on his fellow Texans. He said that there was no other person from outside of the state who could help to change the course of this election for better or for worse.

O’Rourke may not be seeing things as clearly as he may need to…it appears that Texas voters would be more likely to vote for actor Matthew McConaughey than Beto in the upcoming gubernatorial race, according to a new poll.

The Dallas Morning News and the University of Texas at Tyler released a survey on Sunday finding that, among a general population of voters, Texans would choose McConaughey over O’Rourke by nearly 2-to-1. It was 49 percent of all voters who said they favored the movie star, while just 27 percent said they would support O’Rourke.

McConaughey has not yet confirmed whether or not he will run for the office in 2022. He has not even declared what political affiliation he would choose. But he has been dropping some heavy hints in the past year.

Matthew McConaughey is a self-described “statesman-philosopher, folk-singing poet.” And he has continually done pretty well in recent polls. Some experts believe that he could put up a tough fight against both O’Rourke and GOP Governor Greg Abbott.