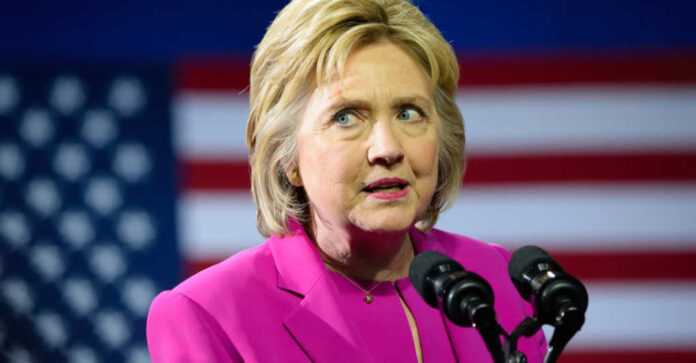 Of all the things Hillary Clinton could be holding on to, the loss to Trump is the biggest thing on her mind. No matter the event, people, time, or place she must bring up Trump. The man not only lives rent-free in her head, with how popular her hatred has made him, but it’s also as if she is paying him to occupy space in there. With the frequency of his name escaping her mouth lately, it almost seems as if she wants to challenge him in 2024 or do something else foolish.

Tuesday she dropped by MSNBC and appeared on The Rachael Maddow Show where she attacked Trump and supporters about civil rights, human rights, and cultural changes. More directly, “I do think that we are facing a crisis of democracy, a crisis of legitimacy, a crisis that really goes to the heart of what the future of our country and many others around the world will be. So I spend my time trying to figure out what we can do about it. I am not ever going to give up because there’s just too much at stake…I think that the role of disinformation, the way that propaganda has been really weaponized, and the increasing ability to manipulate people through algorithms and other forms of artificial intelligence will only make this harder to combat. so I don’t want to be pessimistic about it because I think this is a worthy and necessary battle.” Very powerful statements here Hillary.

Powerful for a woman who looks over the fact that her husband has had more scandalous affairs than Roman Polanski. Yet she says ‘propaganda has been really weaponized’ as if she and the rest of the left didn’t fire the first shots. It’s a powerful thing to say such charged words when nobody will come back after you. Especially since any time some has come back after you or your husband they end up dying in a car accident or commit suicide by shooting themselves in the back of the head while having their hands bound in front of them. Kind of funny how those weapons work eh?

An appearance from Hillary would never be complete without her making some other equally insane or obscene claims from the left playbook. With her droning on like a never-ending river of hot garbage spews from her mouth, she had to really double down and even push her book at the same time (makes a great coaster or cat box mat btw). “In fact, in the book I wrote, State of Terror, as you know, there is a plot against the country by people who truly want to turn the clock back.

They believe that the progress we’ve made on all kinds of civil rights and human rights, the cultural changes that have taken place, are so deeply threatening that they want to stage a coup. Now, think about it because that’s truly what is behind Trump and his enablers and those who invaded and attacked our Capitol. They don’t like the world we’re living in, and they have that in common with, you know, autocratic leaders from Russia to Turkey to Hungary to Brazil and so many other places, who are driven by personal power and greed and corruption but who utilize fears about change to try to get people to hate one another and feel insecure and, therefore, be easily manipulated by demagogues and by disinformation.” With filth like this spewing from her mouth, who knows just how far she’ll go before she runs out.