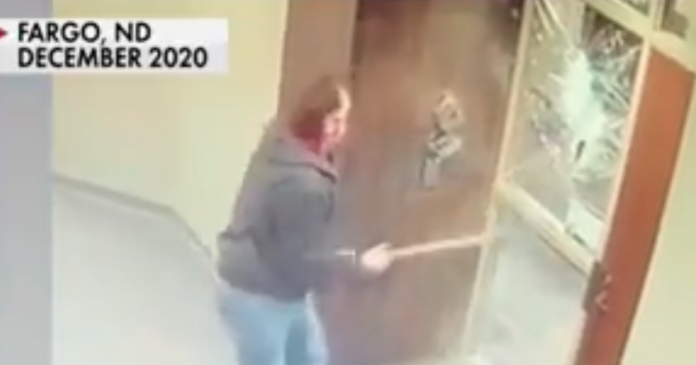 We’ve seen harsh treatment meted out to the people connected to the Jan. 6 riot. We’ve seen many held without bail and some have received long sentences like the QAnon Shaman, Jacob Chansley, who got a 41-month sentence for “obstructing a federal proceeding” even though he didn’t do anything violent, but was a very visible face during the event.

By comparison, the treatment of BLM and Antifa rioting has been very different, with many not facing any consequences for their actions. Nothing makes the comparison clearer than the story of the Antifa guy who attacked a Republican senator’s office with an ax. First of all, you probably haven’t even heard of the story, unlike the constant focus liberal media has had on Jan. 6. The story of the ax attack didn’t get any national attention until today when Tucker Carlson covered the story on his show with Fox’s Bill Melugin. Check out what this guy, Thomas Starks, did to the federal office of Sen. John Hoeven (R-ND) in Fargo on Dec. 21, 2020, using an ax.

Starks pled guilty to the destruction of government property. Federal sentencing guidelines recommended that he get between 10-16 months. But instead, he was given probation and only had to pay $2,784 in restitution. He even got the ax he used in the commission of the offense back. Starks mocked the FBI for giving the ax back to him.

Starks had previously declared himself Antifa and indicated that he would attack people he deemed “fascists” in the future. “I am ANTIFA. I will always attack fascists, racial superiority complexes built around nationalism that promotes genocide to fuel a war machine is the worst humanity has to offer.”

“It is inexcusable that Chairwoman Oversen would be personally involved in supporting a far-left extremist whose violent actions constitute an assault on our democracy,” Chairman Rick Berg said on Jan. 6. “Video evidence leaves little in doubt about this attack, so it is unfathomable why ND Dem-NPL officials would lend their name and financial support to a man they refer to as ‘innocent.”

We are a country based on the rule of law, which includes the concept of equal treatment under the law. But when we see things like this, it eats away and erodes that basic foundational principle of our government. It makes us question if there still is that equal treatment under the law or whether your politics determine how you will be treated. It would be an incredibly dangerous thing to lose that cornerstone on which we were built.