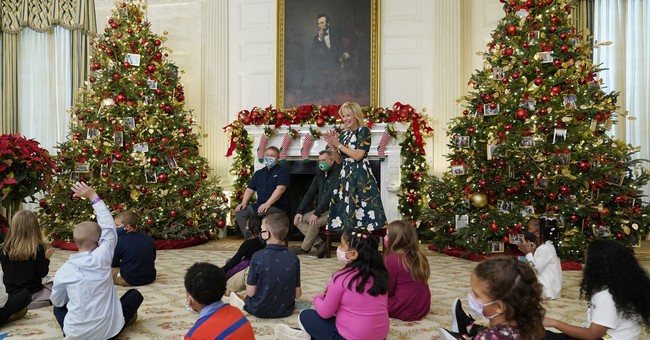 To say the Biden White House has been their own worst (hypocritical) enemy when it comes to coronavirus vaccine/mask messaging would be a gross understatement.

We’ve documented it here extensively, including how President Biden violated his own federal mask mandate within hours of his presidential inauguration, how he and First Lady Jill Biden went maskless indoors during a visit with Rosalynn and Jimmy Carter at their Georgia home back in May (which was fine) but then proceeded to walk outside fully masked (not fine), to this past weekend and today, where the POTUS was observed repeatedly not abiding by the mask guidelines he still demands others follow.

But though the leader of the free world not practicing what he preaches in the middle of a pandemic is bad enough, other photos that emerged earlier today during a storytelling event involving First Lady Jill Biden and second-graders from a Maryland elementary school during the White House’s Christmas decoration unveiling festivities perhaps even more perfectly illustrated the blazing mask hypocrisy coming from this administration.

It’s seen in the photo at the top of this page, and below. Notice that Mrs. Biden is unmasked during the event. Sitting next to her and masked up were brothers Martin and Chris Kratt, who are creators of the animated PBS show “Wild Kratts.” Also masked? The children, who were socially distanced as well:

Here’s video from the scripted gathering:

Not only is this terrible from an optical perspective, but from a public guidance perspective, it’s arguably even worse. Remember, it’s children not adults who are the least likely to not only catch the virus but to get a bad case of it in the event that they do. Plus, Jill Biden is fully vaccinated and has gotten the booster shot.

Yet as we all know, you can still spread the coronavirus including the new “Omnicron” variant (hat tip: Joe Biden) even when fully vaccinated. So why is it she wasn’t masked while the kids were?

It just makes no sense, unless you understand that much of the Democrat messaging on masks has been political theater from the start.

Will we hear any outcry from the mainstream media on the First Lady appearing during this event maskless while others in attendance including young children were? Not likely, because that would mean they would be forced to criticize a Democrat, and we just can’t have that. Contrast their lack of coverage on this matter to how they ripped into former First Lady Melania Trump nearly a year ago during a similar Christmas story event at a children’s hospital where she observed mask protocol up until the point she read her story.

“The first lady arrived in the hospital’s main atrium wearing a mask. When she took her seat in front of a tree, she removed the mask,” CNN reported at the time. “Though she practiced social distancing, the hospital’s policy specifically requires all visitors to wear a mask.”

A hospital spokeswoman saved the day, however, by pointing out Mrs. Trump was operating on Washington, D.C.’s guidelines for indoor mask-wearing.

“In the case of today’s visit which was broadcast to our 325 patients, while the First Lady did remove her mask while she read a story, she was more than 12 feet away from others in our large atrium. All other people in that space were wearing masks. The remainder of her visit, she wore a mask,” Children’s National spokeswoman Diana Troese told CNN in response to their Melania Trump hit piece.

Can we expect CNN to at least show a shred of consistency regarding Jill Biden’s bad mask optics? Don’t hold your breath. They’ve got more important things to focus on, like how most people in this country are supposedly deluding themselves into thinking things aren’t all wine, roses, and soft puffy clouds in Joe Biden’s America.