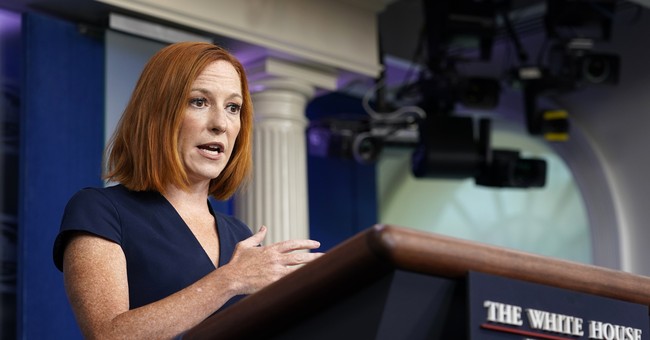 The White House is getting nailed on a variety of different issues from the weekend now that White House Press Secretary Jen Psaki had a briefing today.

As we reported earlier, Psaki ducked and weaved but couldn’t explain away why Biden was not masked inside of a Nantucket store, especially when he’s urging everyone to wear masks in the face of the new Omicron variant (or as he called it the ‘Omnicron’ variant).

The White House also got called out on the issue of putting travel bans in place after their prior criticism of the travel bans of President Donald Trump. Listen as White House Press Secretary Jen Psaki tries to explain how Trump travel bans were somehow ‘xenophobic’ but Biden bans are not.

Psaki claimed they weren’t criticizing travel bans but criticizing a “tweet” of President Donald Trump’s which she claimed was xenophobic.

“The president has not been critical of travel restrictions, we have put those in place ourselves,” Psaki claimed. “He believes we should follow the advice of health and medical experts. That’s exactly what he did in putting in place these restrictions over the weekend.”

That’s just a lie. She doesn’t point out what “tweet” was supposedly “xenophobic,” likely because there wasn’t one. Biden’s criticism calling Trump xenophobic came just hours after Trump cut travel with China on Jan. 31 during a campaign rally. Some suggest that Psaki might be talking about Trump referring to the China virus. But Biden’s criticism preceded Trump’s use of that term which isn’t xenophobic in any event.

The other problem with Psaki’s claim is that Biden was quite critical of travel bans, contrary to what Psaki is claiming now.

Indeed, he didn’t agree that travel bans were a good thing until April 3, and even then it wasn’t him, it was his team that did so. It took the Biden team that long to make a definitive statement on the question. Imagine if we had waited until April 2 and Biden coming around to the idea? It would have been far worse. It was because Trump was willing to take that action on Jan. 31, that he likely cut some transmission.

One can argue about the greater or lesser benefit of travel bans. What you can’t lie about is the fact that Biden was not a fan of the travel bans last year and he expressly criticized them. But suddenly, when he has to deal with the situation himself, now he is for the bans.

The other hypocritical thing about this is that Biden has imposed a ban only on African countries as to this new variant, yet the Omicron variant has been seen elsewhere as well, in multiple other countries including Israel and the Netherlands. Why is there only a ban on African countries? We know that if Trump were in charge, Biden would be screaming “racist!” Can we remind him how he criticized the African travel ban that Trump did have over lack of vetting and security?

Can we now scream “racist” at Joe Biden? Not to mention “hypocrite?”