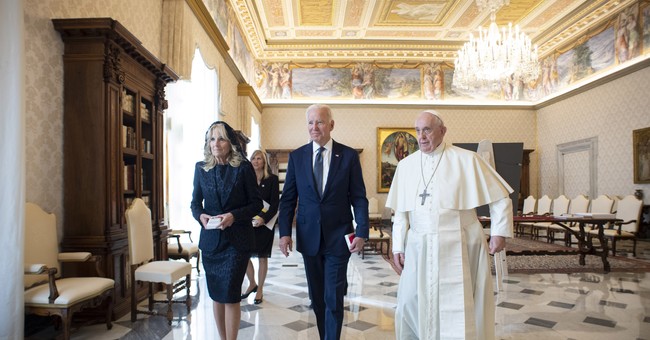 We, and countless other conservative media outlets, have written extensively about “devout Catholic” Joe Biden’s legendary hypocrisy, particularly with all things religion. It knows no bounds. We’re talking about a guy who refers to on-demand abortion as an “essential health care service.” With a straight face.

As is the case with every good Democrat, Biden is a master at talking out of both sides of his mouth. When it comes to religion, Joe’s a champ. Nobody comes even close, these days — except for maybe Nancy Pelosi.

Biden, noted The American Spectator, “seeks to cut off federal funding to agencies that do not conform to his LGBTQ agenda.” If any of that confuses you, you have not been paying attention.

So, what is it with this guy and his religious hypocrisy, you ask? The same thing that’s wrong with “deeply religious person” Nancy Pelosi, who refers to on-demand late-term abortion as “sacred ground.”

These people are devoid of faith, instead, cherry-picking what to be for and what to be against, solely with an eye on the voting booth. It’s called being a Democrat. Disgusting and pathetic as hell? Of course.

So back to Biden.

As reported by The Boston Pilot, self-described as “America’s oldest Catholic newspaper,” on Sunday, Biden’s latest attack on religion is against faith-based foster-care agencies.

In acting on the rule, HHS specifically rescinded waivers that allowed child welfare agencies in South Carolina, Texas, and Michigan to not place children with same-sex couples in accordance with their religious belief in traditional marriage between one man and one woman.

HHS Secretary Xavier Becerra said the Trump-era rule was “a blanket use of religious exemptions against any person or blank checks to allow discrimination against any persons, importantly including LGBTQ+ persons in taxpayer-funded programs.”

The above is just the latest example of Biden’s attack on religious liberty. As suggested by The Heritage Foundation earlier this year, his rejection of religious freedom as a human right could not be clearer.

One need look no further than Secretary of State Antony Blinken for a perfect example.

In his remarks on the May 12 release of the 2020 Report on International Religious Freedom, Secretary of State Antony Blinken correctly asserted that “religious freedom is a human right,” one at the heart of what it means to be human.

As the Foundation suggested, Blinken’s comments represent a profound change in understanding from that of previous administrations in framing America’s official view of international religious freedom. Then again, the hypocrisy of the left knows no bounds.

Biden’s assurance that “the Biden-Harris administration will protect and defend religious freedom around the world” also rings hollow, observed the Heritage Foundation, given that the Biden administration is simultaneously advancing a progressive ideology that increasingly threatens religious freedom around the world and champions the embrace of rights based on sexual orientation and gender identity.

The Heritage Foundation then made what should be an obvious observation:

Religious freedom requires more than an absence of violence and discrimination.

Ooh, let’s think that through.

“It is a pre-political natural right,” postulates The Heritage Foundation. “It encompasses an individual’s right to freely believe, or not to believe, in religious truths and to manifest those beliefs in speech and action.”

Heady stuff. Heady stuff expressed in the United Nations’ Universal Declaration of Human Rights (Who knew?), which has global support, and the International Covenant on Civil and Political Rights, to which the U.S. is a signatory.

But here’s the thing. As is generally the case with Biden, we need to look no further than his own words to see the hypocrisy behind everything this guy says or does. In later October, the White House released a statement from “Biden” on the “Occasion of International Religious Freedom Day.” Excerpts:

Today, on International Religious Freedom Day, I’m proud to recommit the United States to this freedom–enshrined in our First Amendment–and to lead our global effort to press for freedom of religion or belief for everyone, everywhere.

Promoting and defending religious freedom for all is as important now as it has ever been.

Tragically, repressive governments, violent extremists, and other societal actors continue to persecute and abuse individuals and groups simply because of their religious identity, practices, or beliefs.

Uh-huh, Joe. And that squares the circle with on-demand abortion and “devout Catholic” stuff, how? Voting booth aside, of course.

“Come on, man,” seems to be President Biden’s signature response to any uncomfortable question. The phrase is meant to be both dismissive and conclusive in ending inquiries, frequently used to counter reporters before walking away.

When asked during a CNN town hall about those objecting to COVID vaccines, Biden mocked them and their claimed rights with “Come on, ‘freedom.'”

To Turley’s point, Biden attempting to ridicule opponents — yet ridiculing himself instead — has been the guy’s habit for nearly 50 years in D.C. The best part has been his complete obliviousness to it.

The problem is that the courts already recognize some religious exemption arguments. Those arguments are based on both the constitutional protection of religious values but also [the law which] declares unlawful any “employment practice for an employer … to fail or refuse to hire or to discharge any individual, or otherwise to discriminate against any individual with respect to his compensation, terms, conditions, or privileges of employment because of such individual’s … religion.”

Look, it’s reasonable to assume that any politician will get caught between a rock and a hard place from time to time, on any number of issues. That said, why is it that Joe Biden continues to be called out for his anti-Christian beliefs, versus his (non-existent) “evangelical” positions? Rhetorical question, of course. (See: “voting booth.”)

Before we go, lemme ask you a question.

I ask. You respond.