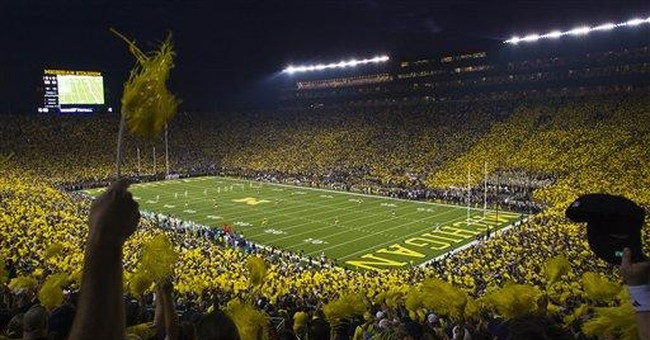 Michigan, we have a problem and we better get ahead of it right now. There is absolutely no time to lose, and we need to be quick and decisive to make sure we continue the momentum that was achieved after Saturday’s stomping of the Ohio State Buckeyes by the Michigan Wolverines at Michigan Stadium — in front of 115,000 humans breathing oxygen and expelling carbon dioxide.

The whole state needs to quarantine.

In bubble wrap, if possible.

I have to admit that I was blissfully unaware of this possible plot during and after the game yesterday that was played in Ann Arbor, Michigan. I have lived in the state my whole life and am well aware of what Michigan-Ohio State week means to both states. Neither school has any affection for the other, which makes it one of the great rivalries during college football rivalry week. Yet what transpired yesterday might be one of the dirtiest tricks during any rivalry in any sport — and we must fight back now.

I was tipped off on some possible chicanery this morning, when a tweet was sent to me by a friend from the great Hugh Hewitt, after yesterday’s game showing the joyful aftermath of the Wolverines crushing the Buckeyes on their home turf. Here is the tweet.

I looked at the tweet and chuckled, being I know that our beleaguered Governor would never order that to stop. I have written why here at RedState, and it is for one simple reason. She is up for reelection next year, and there is no reason to tick off potential voters, with under a year before they go to the polls.

As I wrote earlier this month with this post, Michigan Leads Nation in COVID Cases and Governor Lockdown Is All of a Sudden Missing…

Michigan is in a crisis and it is one of biblical proportions, and our most noble leader seems to be missing. Actually, I’m not serious, we have seen COVID spikes before and we got through it but Governor Whitmer is missing this time and we need leadership. Maybe just not hers, though.

The Great Lakes State is once again making some headlines because we have a spike in COVID and this has the media in the state heading for the hills in fear. Unlike last year, though, our part-time fearless Governor is not only NOT issuing orders to save the lives of the unwashed masses, she can’t be found anywhere to offer a meager comment.

From The Detroit News…

Michigan again leads the country in new COVID-19 cases per population over the last seven days, according to tracking data Tuesday from the federal Centers for Disease Control and Prevention.

The state has reported a seven-day new case rate of 504 per 100,000 residents, the highest number nationally, the CDC found. Minnesota followed in second at 490. The figures are another setback in the state’s 20-month fight against the virus and came amid spikes in new infections that are testing the capacity of Michigan’s hospitals.

Michigan last led the nation in new cases per population in the spring during a surge that peaked in April. It remains unclear how long the latest surge will last and how it will affect health care workers who’ve been dealing with the pandemic since March 2020.

Last year, Governor Whitmer got cramps in her hand writing so many executive orders and sending secret signals to her MDHHS director to make sure restaurants and bars closed early and to demand people should be wearing plain, cloth masks or be shunned. Her colleague in New York on Friday issued new mandates ( Variant Mania: New York Governor Issues Mandates Just Like Her Predecessor, Cuomo ), so we were expecting much more than what we have received. With cases rising in the state this year, all of a sudden she seems to be missing in action.

It is quite a welcome surprise.

Yet, Professor Hewitt’s tweet made me think that something nefarious may be afoot here, with allowing a sea of unwashed humanity not only into the stadium (one of the largest in the country), but also rushing onto the field, yelling and whooping it up.

Maybe this was planned by Ohio all along.

They are still pissy about Michigan getting the Upper Peninsula after the Toledo War — because they received…Toledo.

Also, they must have known that Michigan would eventually beat the Buckeyes on the field, after Jim Harbaugh lost six straight to them. So, they figured if it had to happen, let it be in Ann Arbor. Where 115,000 rabid college football fans would be breathing heavy, screaming and yelling, and eventually charging the field and causing a super spreader event.

Possibly you recall that White House Rose Garden ceremony where President Trump announced his Supreme Court pick to replace Justice Ruth Bader Ginsburg, and there were 200 people there. Dr. Fauci called that a SUPER SPREADER EVENT at the time. According to that logic the game yesterday was a SUPER, SUPER SPREADER EVENT on gamma radiation which as you recall, made Dr. Bruce Banner a raging green jerk.

Governor Whitmer had better take serious action, if any evidence is found that Ohio planned all this to try and take those Wolverine fans and make them sick. In the meantime, everyone should just wrap themselves up in bubble wrap and drink hot toddies until the 7- or 10- or possibly 15 days until something passes… and you will feel stellar.

Until then, can someone check the airports to see if the Governor has decided to take a private jet out to a warmer climate for the holiday ( Whitmer Reveals How Much Was Paid for Her Private Jet Trip to Florida and It Was Not Much), being we know that is a thing.