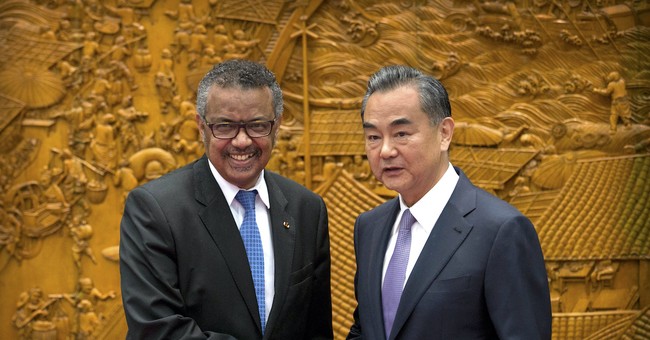 We’ve been reporting on the new COVID variant that the South Africans have identified.

It’s been named the Omicron variant by the World Health Organization (WHO), as we reported. But that had some folks asking why was it named Omicron, appearing to skip both the letters Nu and Xi in the Greek alphabet, which the WHO had been using for naming the variants. The last variant of concern was Mu, so it was expected the next would be Nu. So many were speculating that this skipping was because the WHO was toadying — once again — to their buddies, the Chinese, and they didn’t want to offend Chinese President Xi.

Now, the WHO has weighed in and admitted yes, they did deliberately skip the two letters. In a statement, the WHO explained why they did it. Their explanation is hilarious because I don’t know what you think, but it sure sounds to me like they’re more or less confirming the speculation.

[T]he WHO said it skipped nu for clarity and xi to avoid causing offense generally.

“‘Nu’ is too easily confounded with ‘new,’ and ‘Xi’ was not used because it is a common last name,” the WHO said, adding that the agency’s “best practices for naming disease suggest avoiding ‘causing offence to any cultural, social, national, regional, professional or ethnic groups.'”

The WHO also said that “we have agreed [to] naming rules that avoid using place names, people’s names, animal, etc. to avoid stigma.”

Funny how they weren’t concerned about anyone with the last name of Mu or any of the other letters before Xi, isn’t it?

According to the AP, this is the first time that the WHO has skipped letters when naming the variants. So, apparently, the only folks they don’t want to offend are those named Xi. They also don’t care about offending the Zeta cartels.

Calling it the Xi virus would literally be perhaps the most accurate name they could have chosen. But the WHO is so submissive to China, they couldn’t bring themselves to do it. Given how they have carried water for China right down the line, who could trust anything they have to say at this point? That’s why President Donald Trump wanted to pull us out of our support for the WHO. Biden reversed that, refusing to hold either the WHO or China to account.

Jonathan Turley nailed it, referring to Xi Jinping as “He Who Must Not Be Named.” “It is obviously symbolic (literally) but the concern is that it continues to show a controlling sensitivity for not offending the government,” Turley said, saying the WHO should address the controversy.

Sen. Ted Cruz (R-TX) pointed out what a problem this was for any potential future viruses.

Donald Trump, Jr. cut right to the essential truth about COVID or any of the variants.

Trump, Jr’s tweet is right on target. Unfortunately, with Joe Biden in charge, China will never be held to account for what they did and the WHO will continue to provide them cover like this.