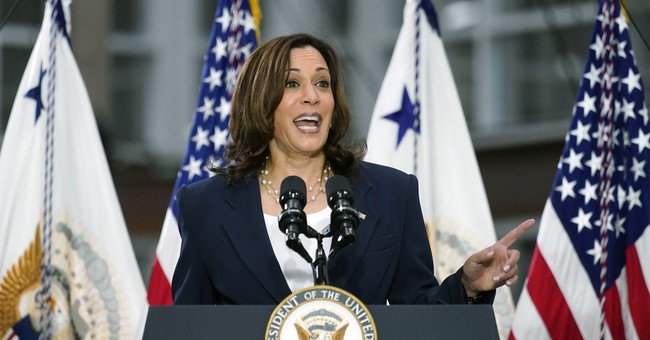 When Joe Biden took possession of the Oval Office in January, his first executive order — of many to come — announced a “whole-of-government equity agenda.” Forget that old-school “All men are created equal” stuff — we’re talking about “equity” replacing equality. “Societal “leveling, as it were.

And in a 2020 presidential campaign ad, then-vice-presidential candidate Kamala Harris lectured America on “the difference between equality and equity.” Equity, Harris argued, cannot coexist with equality, freedom, and justice, since those principles dear to America stand in the way of societal leveling.

Equality suggests, “oh everyone should get the same amount.”

It’s about giving people the resources and the support they need, so that everyone can be on equal footing, and then compete on equal footing. Equitable treatment means we all end up in the same place.

Complete illogical “logic,” on multiple levels — but a tenet of the far-left just the same.

Mensa-quality, ain’t she? Deep, too.

The “logic” on display by Harris doesn’t only apply to material wealth or status in life. Applied to the criminal justice system, leftist equity means verdicts should be meted out not according to the guilt or innocence of the defendant but according to the government or society’s view of what will produce a properly reordered society.

George Neumayr, a senior editor at The American Spectator, illustrated leftist equity and the rule of law after Kyle Rittenhouse was acquitted on all charges last week. Specifically, Harris’s response to it.

After the jurors delivered their verdict in the Kyle Rittenhouse trial, Kamala Harris ominously said:

“I’ve spent a majority of my career working to make our criminal justice system more equitable. It’s clear, there’s still a lot more work to do.”

In other words, Rittenhouse should have been subject to a trial not by law but by mob politics. Joe Biden, of course, agrees. He let it be known that he supports those who feel “angry” about the verdict.

The facts in the Rittenhouse case clearly didn’t matter to the left. Hell, Biden had Kyle charged, tried, and convicted, labeling the 18-year-old a “white supremacist” before he knew a single fact — if he does, now. Facts don’t matter to the left, nor does its view of “equity” have a damn thing to do with justice.

Neumayr put it this way:

“Equity” is simply a euphemism for an endless and ubiquitous project of race-based social engineering that justifies new injustices in the name of eliminating old ones. […]

The goal of Kamala Harris is not to make the criminal justice system more equitable but more ideologically partial. Hence, she can blithely disregard the facts pointing to Rittenhouse’s innocence, while supporting the release of Black Lives Matter rioters from jail.

From Biden on down (or up, depending on one’s POV), we’re now told that the right of self-defense — by white people — is a product of “white supremacy.”

“This is critical race theory at its most demented,” Neumayr correctly observed. “If the left gets its way, trial by ‘equity’ politics will become the norm.”

Austrian Economist F.A. Hayek observed: “There is all the difference in the world between treating people equally and attempting to make them equal.” Today’s left has even blown past that goal. “Equity” in the demented mindset of the left means denying equality to “white people” so, as Kamala Harris suggested, Black people can “catch up” — with the Democrat Party there to help them, every step of the way.

Finally, as Irish playwright George Bernard Shaw observed, “The government that robs Peter to pay Paul can always depend on the support of Paul.”