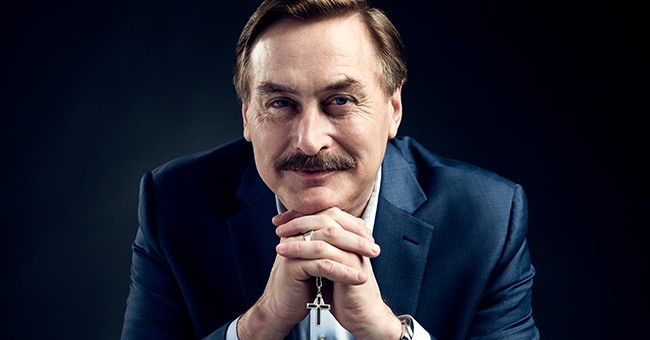 First, my objective is to change zero people’s minds about anything — including Mike Lindell.

Second, having written for RedState for over a year, I’m fully aware of the comments to come — good, bad, mad, indifferent. Moreover, I’m good to go with “all of the above.” I didn’t get wherever I am by preaching to the choir. On purpose. Sorry not sorry, never been my thing. Never will be.

Question: What do Sidney Powell, Lin Wood, and MyPillow dude Mike Lindell have in common?

Answer: All three have made ridiculous allegations and wild-a** predictions in the aftermath of the 2020 presidential election that never had a snowball’s chance of being proven true.

Team Trump finally cut ties with Powell, as her bizarre claims and predictions continued to pile up.

Wingnut Lin Wood predicted Vice President Mike Pence would be arrested and executed by firing squad. For “treason,” no less. Neither of those ever happened. Also obvious, there was no one in the Trump administration more loyal to Donald Trump than my fellow Hoosier. Period.

That brings us to Mike Lindell.

Let me first say this: Having witnessed life-threatening drug addiction in a loved one firsthand, I have nothing but respect for Lindell for not only saving himself from himself, but also for becoming a successful businessman beyond what I’m sure were his wildest dreams at the time. There is no better American success story on a personal level.

That said, dude needs to stick to pushing pillows.

Big, fat, nothingburger. By the end of the first day, he had merely provided a smattering of data that amounted to nothing, according to experts in attendance.

Yet? Lindell had hyped the extravaganza as all but world-changing. But should we be surprised? This guy has ridden a lumpy pillow, sheets, mattress toppers, and slippers to a fortune of perhaps several hundred million dollars. Let’s just say P.T. Barnum would have been impressed.

Lindell on Tuesday released a copy of his long-promised Supreme Court lawsuit he continues to claim will overturn the 2020 presidential election, though the complaint has not been filed. While he failed to bring the lawsuit by Thanksgiving as promised, he did post the 82-page complaint to his website.

Also on Tuesday, Lindell told former Trump advisor Steve Bannon, now a podcaster, that details of the lawsuit would be revealed on Thanksgiving during a 96-hour telethon on his FrankSpeech website. Lindell has repeatedly vowed that his lawsuit would somehow “reinstate” Donald Trump as president.

During the appearance on Bannon’s The War Room, Lindell said his life has been “chaotic,” of late.

“We’re flying around the last couple of days and it’s been very chaotic.

“We do have a full copy of the complaint with any of the changes that they needed and we’re going to have a great update for you.

“This is historic. I’ve seen the complaint. It is epic.”

“I met many AGs. I was on the phone with four of them yesterday and some of them have so much going on right now that last Friday they gave them until today to fight these mandates where kids had to take the vaccine.”

None of that occurred. While Lindell has repeatedly claimed multiple state attorneys general would cosign the suit, no filing had been made as of late Wednesday morning. Why not?

“You know a lot of things are happening out there that are very suspicious,” Lindell teased.

“It is kind of like herding cats. You have different ones at different levels.

“I do have some — a couple — which I don’t want to announce right now that said straight-up we’re not going to do it.”

No idea what that means.

I do. As has been the case with Lindell every time, he continues to overpromise and underdeliver. Where are the signatures from the state attorneys general? Where are the filings? Where are the “world-changing” revelations he promised as he hyped his cyber symposium?

Here’s the thing. Regardless of where one stands on the 2020 election, there comes a time, as the old idiom wisely suggests, “If the horse is dead, dismount.” If we’ve learned anything from Sydney Powell, Lin Wood, and yes, Mike Lindell, it’s that the horse was never alive.

Now, can someone please inform the horse?

And, MyPillow guy? Go back to pushing pillows.