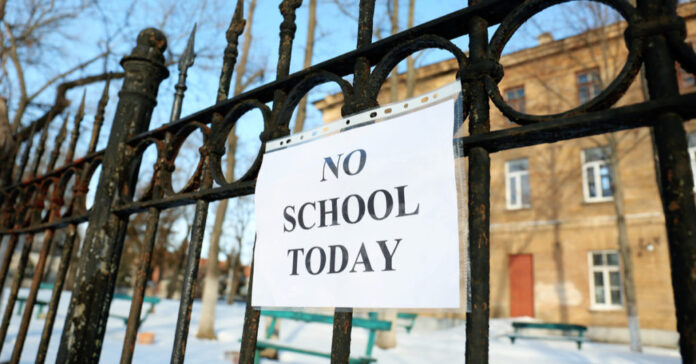 The public school system in America is under attack again by the filthy liberals seeking to use the system to indoctrinate young people against their parents and country. Joe Biden’s nasty vaccine mandate and the deadline have forced many people into choosing between obeying illegal laws or providing for their families. And what it has caused is a massive shortage of teachers in several school systems around the country.

The schools are scrambling to avoid fines and penalties for unvaccinated workers. Biden has left no loophole unplugged when it comes to his pandemic mandate. And what he is causing is class cancelations, students to work in the cafeterias, and many other things that teachers once filled.

Five states have had to cancel classes due to no staff. Some schools gave students an extra day off over Veterans Day to deal with the shortage of teachers. And other schools have gone back to pandemic learning options such as Zoom from home and other venues so that they can continue to teach the students. And in typical Biden fashion, the old man fails to see the problem and refuses to admit that he is the cause.

Amie Baca-Oehler is the President of the Colorado Education Association. She stated that “The reality is that these districts just don’t feel they have any other options than canceling school for the day. This should serve as a wake-up call that we need to do better by our students and our public schools.”

The liberals have ditched parents again by forcing schools to close. This ends up causing parents to scramble to make sure their kids can continue learning or are in good hands during the day.

Parents are enraged already from the attacks they are getting from Joe Biden. But to throw this on the parents causes them to realize that the liberals are selfish people. The Democrats may try and understand why the red wave is coming. But they will never admit that the reason is because of the selfish policies that have divided the nation.

The San Diego Unified School District declared that a day of closure would fall under a “mental health day” for students. They cannot admit that the Biden blunder is the reason for the closure. The day should be called the “Biden Killed Your Education Day.” But after parents attacked the plan, the school district decided not to use the mental day as a reason to close.

Every school is affected in some fashion. One school may only be out a few teachers, but others in Maryland are short hundreds of workers.  Some education officials are even thinking that many teachers and staff will resign because of the Biden dictatorship.

When the janitors and bus drivers fail to report to work, kids are left using filthy facilities, and kids are left on busy roadways waiting for a bus that will never show up. Biden may claim that he cares about kids, but the lies are shown in how he cares for them through his actions.

Another plague that is striking the schools gifted to them by Joe Biden is the supply chain issues. They cannot get the food in the building because it is sitting at a warehouse waiting to be delivered. Dimitra Barrios is the director of the food service at Ridley School District in Pennsylvania. And she said, “We are hoping that deliveries arrive so that we don’t have to adjust our menu to ensure that our students receive meals.”

Schools around the country are beginning to report that they cannot feed students because they do not have the supplies to do so. Many of these kids depend on the breakfast at school and the lunch hour to provide them with the only meals they will get for the entire day. The truth of the matter is that Joe Biden is creating a socialist environment where people will starve because they do not have enough people to provide for those who depend on them. And they have Joe Biden to thank for all of their pain and suffering.